In 2014, a 1.92 km eastward extension to Tripunithura from Petta was approved to be be built as part of Phase 1A (Petta – SN Junction) and Phase 1B (SN Junction – Tripunithura) with 3 new elevated stations.

Kochi Metro’s Phase 2 project with a 11.2 km line and 11 stations was approved by the Kerala government in July 2018 with an estimated cost of Rs 2,310 cr. This phase includes the construction of a spur line from Jawaharlal Nehru Stadium to Infopark II in Kakkanad. This phase is currently awaiting the central government’s approval and will likely be funded by the Agence Française de Développement (AFD).

Various announcements of what Kochi Metro’s Phase 3 will look like have been made, but detailed planning for it is yet to begin. This phase could possibly include a northern extension of Line-1 to Cochin International Airport in Nedumbassery and onward to Angamaly.

Kochi Metro Under Construction Line (Phase 1A & Phase 1B)

The embedded map below shows the exact location of all stations and can be zoomed into!

An official PDF route map of Kochi Metro will be added here when available.

Kochi Metro Rail Ltd. fixed Line-1’s fares in November 2016 with a minimum fare of Rs. 10 and maximum of Rs 60. Fare increases by Rs. 10 for every additional zone traveled.

After issue, a single ticket is valid up to 90 minutes and the rider must exit at the destination station’s automatic fare collection (AFC) gate by then. 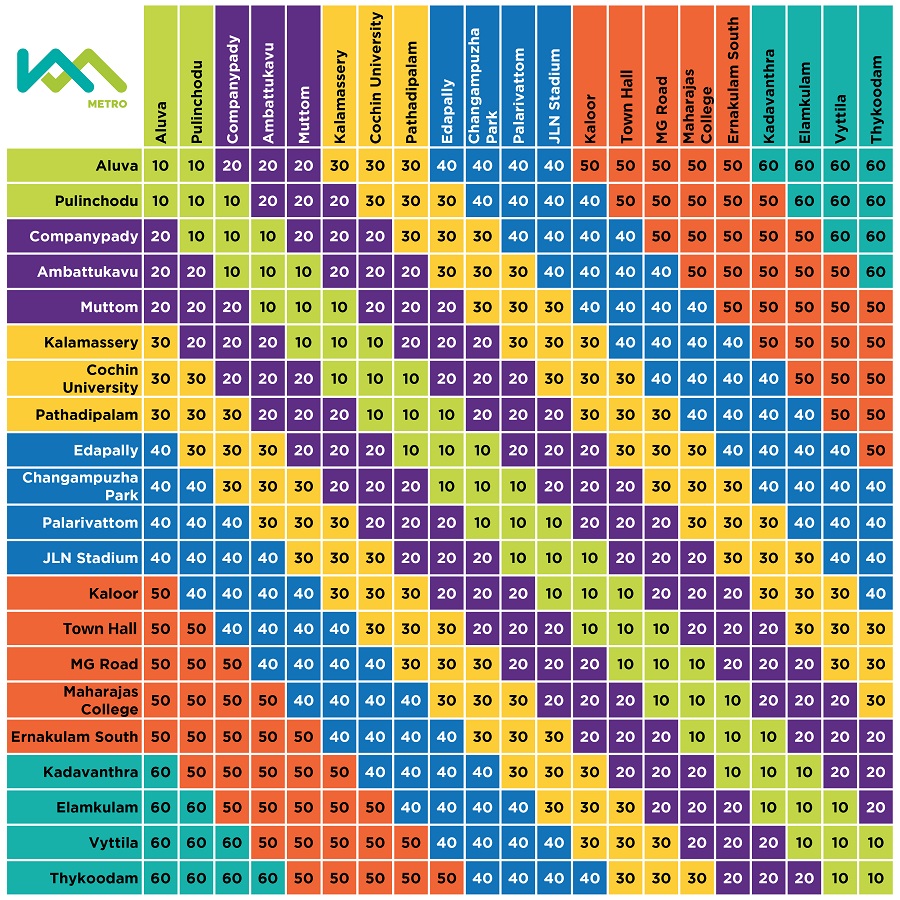 Latest Kochi Metro (KMRL) tender notices can be viewed on the KMRL’s website. News on these notices, their bidders, awarded tenders and contracts are covered in further detail on the news & construction page.

Click on ‘News & Construction Updates’ below for project news, progress and updates.