The second phase of Gurgaon’s Rapid Metro system is rapidly (pun intended) coming along. Construction on all the piers (pillars) is now complete and soon the viaduct/deck of the metro line will start to make an appearance.

Phase II of the project will see the metro being extended 7 km southward along the Golf Course Road from Sikandarpur towards Sector 56. Construction began in January 2013 and this extension will include 6 stations at DLF Phase-1, Sushant Lok, Sector 42, Sector 53-55, AIT Chowk and Sector 55-56. This little infographic provides a view of the route and a snap of the piers shot back in May. 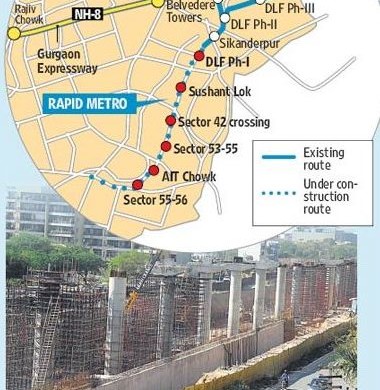 As per the CEO of IL&FS Rail Limited, the second phase will commence operations in September 2016. Additional coaches to service this extension have also been ordered from CSR Zhuzhou (based in China) and trial runs will begin when civil work is obviously complete.

For the third phase of the line, three proposals are currently being evaluated by the government for the metro to hop over NH-8 and cover Old Gurgaon and Palam Vihar.  As and when there’s an update, I’ll be sure to cover it!