As per recent reports, trial runs of the Namma Metro’s underground stretch from Cubbon Park to Magadi Road will begin in August! This 4.8 km stretch is part of the east-west Purple Line that stretches from Mysore Road in the east side of the city to Baiyyappanahalli on the west side.

Currently allied works such as installing  the third rail system, power transmission cable, signalling and other works are going on on full swing. 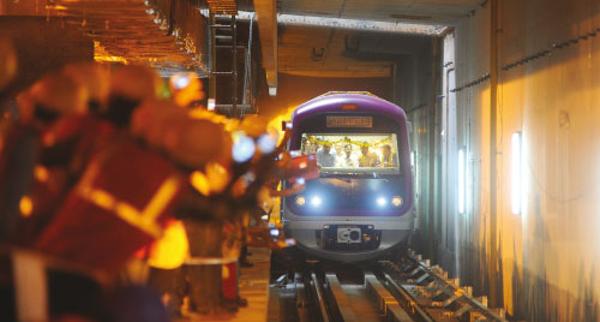 It’s important to note that this stretch will enable the 2 elevated sections (MG Road-Baiyapannahalli and Magadi Road-Mysore Road.) of the Green Line to form one continuous 18.1 km line, thus adding synergy to the entire system. This section also contains the vital Kempegowda station that will form an interchange with the north-south Green line of which the Nagasandra to Sampige Road section in north Bangalore is already operational.

The trial runs are expected to take 3-4 months to complete during which the BMRC will wrap up on finishing works at various stations. As per the procedure in place in India, after that, the BMRC will approach (basically write a letter of invitation), to the Railway Safety Commissioner to get clearance to start commercial operations who will inspect the line, provide recommendations (if necessary) and then give his/her approval. With that said, I expect the line to commence operations sometime in November this year.