Last year, the Hindustan Construction Company (HCC) and Samsung JV complete a simultaneous breakthrough at Delhi’s Dabri Mor station. This station is part of the 4.475 km long Vikaspuri-Palam section of the Magenta line in west Delhi. This is claimed to be second simultaneous breakthrough in the world. The first is believed to have taken place on the 8.6km Toronto-York Spadina subway extension in 2002. 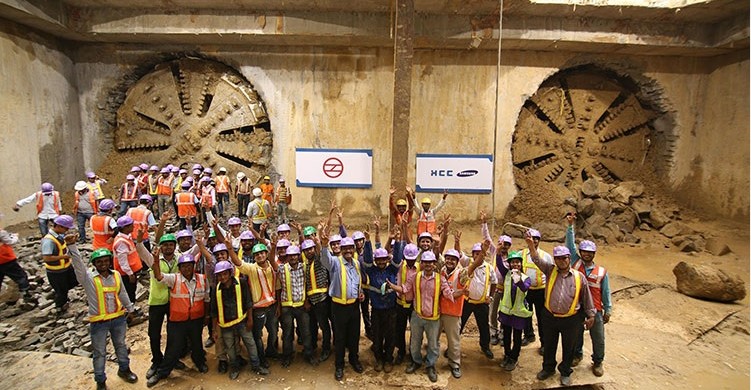 HCC recently released this video showing the breakthroughs by ‘Ridhhi’ and ‘Siddhi’:

Just a little background – HCC/Samsung was awarded the CC-34 contract by Delhi Metro in February 2013. In addition to the 5.8 m diameter twin tunnels, the project scope includes construction of three stations. The JV is using four TBMs to complete the section between a launch shaft at Vikaspuri – from where Phase IV operations may start following the completion of Phase III – through three stations at Janakpuri West, Dabari Mor and Dashrathpuri, and into Palam Station.