As per news reports emerging in the Tamil media (see this video & this report), a tender will soon be released to have the Detailed Project Report (DPR) prepared for the 76 km second phase of Chennai’s Metro project. The tentative routes decided are: 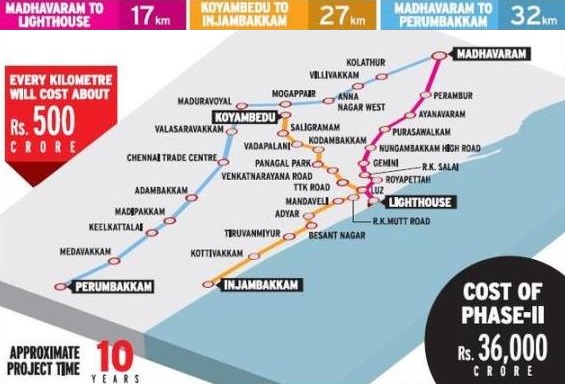 DPRs typically take about a year to be prepared & approved, and a lot of other reports (financial, socio-economic and environment) depend on it, so it’s absolutely fantastic to see the Chennai Metro Rail Corp setting the ball rolling in the right direction to ensure that Phase II works can be contracted out as Phase I works draw to an end.

August 19 2015 Update: The Phase 2 plan now includes an extension all the way up to Siruseri – See: Chennai Metro’s Phase 2 to Connect Siruseri.

For more updates on Chennai’s Metro, see the Chennai section of the TMRG!