I posted this on Twitter yesterday morning as soon as I spotted it, but thought I’d cover it here as well.

Reliance has released the new fare table for the Mumbai Metro system  on their website which will be applicable after October 31 2015. Whilst it has drawn severe criticism from different sets of Mumbaikars, it has been approved by the Fare Fixation Committee that was setup to scrutinize Reliance Infra’s proposal.

Here’s the table. End to end from Versova to Ghatkopar and vice versa, a ticket will cost Rs 110. As you can see, the fare goes up by multiples of Rs 10 between adjacent stations. 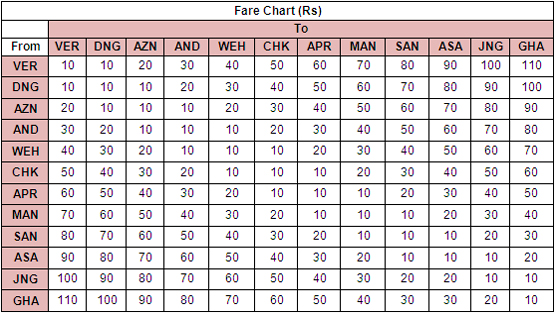 RTI activists are up in arms and have had their opinions about Reliance published in daily newspapers. During a recent interaction with one of them on Twitter I tried probing the issue, but the activist got personal with me and claimed that I had “faith in Reliance” and not in the “Govt & Public”. I wasn’t sure what to make of that ridiculous claim, but I did know that it was time to exit the conversation as things just became personal.

Mumbaikars have roughly 100 days to fight the fare increase before it goes live on November 1. I’ll be closely following this issue and will post an update when we have one.