As per a recent press release by DMRC,  the Delhi Metro Rail Corporation (DMRC) has installed nine new solar power generation facilities in the stations and the depot of the new Badarpur – Faridabad Metro extension of the Violet line for partial fulfillment of the energy requirements of that corridor.

These solar power plants with a total generation capacity of 1,660.4 kWp, have been installed under RESCO (Renewable Energy Supply Company) Model, wherein the capital cost has been invested by the Solar Developer and DMRC has signed the Power Purchase Agreement for 25 years. DMRC shall only pay Energy charges for the actual energy generated.

The power generated will be used for the lighting and other auxiliary requirements of the station and depot buildings. The plants have been installed at following locations:

The power Receiving Sub Station (RSS) of the Faridabad corridor has already been developed as a green building with a 50 kWp solar plant, rain water harvesting and constructed wet land type of  Sewage treatment plant facilities. 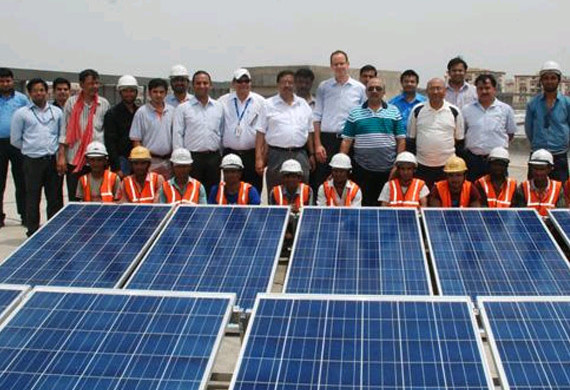 Further, the equipment for solar plant of 200 kWp capacity at Sarai station has also arrived at site and the installation work will commence shortly. In addition to this, the study for installing solar panels on the Foot Over Bridges (FOBs) providing connectivity to the commuters across the National Highways has also been undertaken.

As per its solar mission, DMRC will create facilities for the generation of 20 MWp out of which work has been awarded for 11 MWp so far.  DMRC is committed to install solar plants with generation capacity of 50 MWp in its existing and upcoming network.