As per various BMRC sources, the underground section of Bangalore’s Green line (north-south corridor) will be completed by March 2016 after which the line will be functional by June.

Action taking place on the south side of Majestic station:

• The Krishna TBM (Tunnel Boring Machine) is currently tunneling between Chickpet station and K.R. Market station. It has tunneled roughly 405 meters and has another 22.5 meters left to tunnel. I’m expecting the breakthrough to place within the next couple of days at Chickpet station after which the TBM will be redeployed between the Chickpet and Majestic stations.

• TBM Kaveri TBM is currently tunneling between Chickpet Station and Majestic Station on the parallel tunnel. It has completed 324 meters and has another 416 meters left to reach Majestic station. 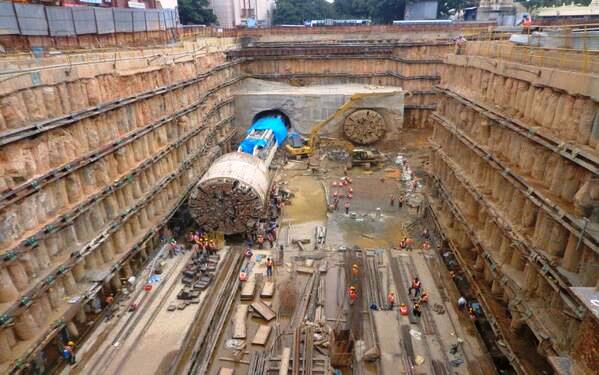 Action taking place on the north side of Majestic station

• TBM Margarita is currently tunneling between Majestic station and the North Ramp in Seshadripuram. It has completed 774 meters and has another 183 meters left.

• TBM Godavari just received a new cutter head last week (See: New Cutterhead Fixed on TBM Godavari) after it broke its original cutterhead, so it has another 3 weeks left before it resume work. Prior to breaking down, it had finished 352 meters and has 610 meters left to reach Majestic.

The deadline for completing Phase 1 of the project has elapsed and rescheduled multiple times, so hopefully June 2016 would be the last deadline for it to become operational.