A recent article in the TOI suggested that the track laying “will start in a few weeks” for the new 14.67 km long east-west Metro line from Howrah maidan to Salt Lake Sector 5. While this has brought cheer to many people, it has in fact been more than a year since track work began. The Telegraph had broken the news back in December 2013 about work beginning in Salt Lake which I presume refers to the track on 3rd Avenue that runs through Salt Lake. 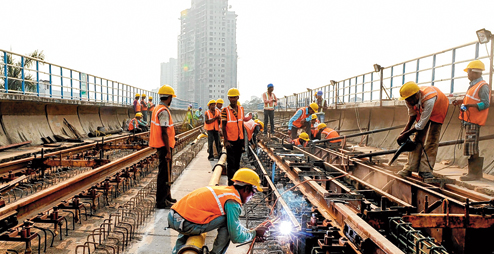 The above image is from 2013, so the article in the TOI is evidently not well researched. If anything, they might have started track laying on other sections of the line. Work on the viaduct in the Duttabad area where work was held up due to squatters recently started in June and will take a year to complete, so this track-laying news is not related to that section of the line.

As a reminder, Kalindee-Rahee, a joint-venture company was contracted to lay the tracks along the entire line. As per the contract which is valued at Rs 166 cr, they will lay around 40 kms of track including the link to the maintenance depot located at Central Park in Salt Lake.