As per various sources, the Chennai Metro Rail Corp will begin conducting trial runs on the blue line between Little Mount and the Officers Training Academy (OTA) in October. The viaduct along with the track has been laid and recently workers were seen installing power cables to form the Overhead Equipment (OHE) which will be used to provide power to the trains. 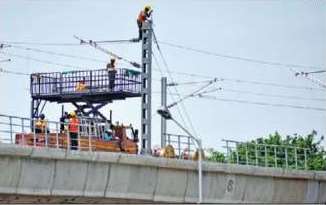 Once the trials are satisfactorily completed, the CMRL will invite the Commissioner of Metro Railway Safety (CMRS) to inspect the line. As per my estimates, this will take place sometime in February-March with commercial operations starting soon after. Once this section of the metro system opens, the Alandur station will start functioning as an interchange between the two lines, thus providing synergy to the entire system which will lead to an increase in ridership.