With the state elections approaching in Bengal, good news has started trickling in with respect to two of the stalled Metro lines in Kolkata.

Following the Calcutta High Court’s intervention in the stalled Howarah Maidan to Central underground section, all agencies have agreed and shown a rare unanimity on an alternative route. This breaks a two year long stalemate due to which work had been stalled as Afcons, the contractor, hadn’t received approval to start tunneling. While earlier the retrieval shaft was to be dug up on the south-east corner of Lal Dighi or BBD Bagh, the alternate route which’ll cost approx Rs 764 cr still has to be designed.

Now the project only requires a NOC from the army and ASI as it will be passing through three nationally protected monuments — Magen David & Beth el synagogues and the Currency Building. This NOC is expected to come within the next 6 weeks.

The Union finance ministry recently gave permission to build the metro viaduct along the Indian Government’s Mint facility in Taratala. This ends a four year old land acquisition issue. The Rail Vikas Nigam Ltd will soon receive approval to first begin work on building a new wall for the premises and once built, it will then have to demolish the existing wall. After that, it will build the metro line.

Also, the Defence Ministry recently finally gave its approval for the Metro to pass under the Maidan. This ends another four year old log-jam over the alignment! 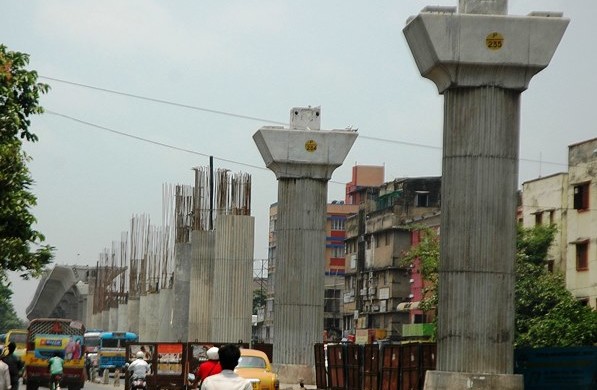 This line is however still stalled at Mominpur where the Defence Ministry is yet to allow the construction of a station on a 2,500 sq m land parcel adjacent to the army’s Command Hospital. This remains the last big hurdle for the project. While the Defence Ministry (and even the state govt) had earlier asked RVNL to skip the station, it has now agreed to reconsider its decision and will make a final call on the matter soon. Hopefully it gives its approval since without it, there won’t be a station for 2.5 kms which will defeat its purpose.