In a recently published report, the Ministry of Urban Development gave its in-principle approval for a 57 km High Speed link between Greater Noida and Indira Gandhi International Airport. They were presented with 8 options and finally settled on one. Following that, the Greater Noida Industrial Development Authority (GNIDA) has set the ball rolling by roping in experts to explore the link.

As per reports, the DPR will be submitted by November. The route of this line in all probability will look somewhat similar to what I’ve drawn below: 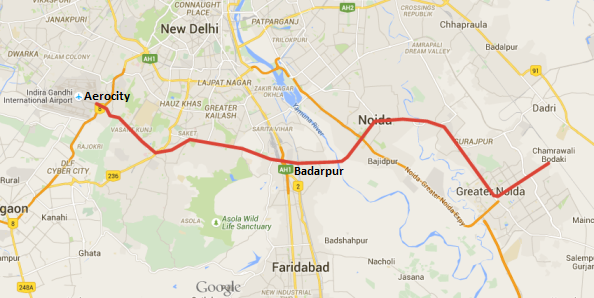 Once the DPR is received by GNIDA, they will forward it to the state and central governments for their approval. The funding for this line will partly be borne by the Delhi-Mumbai Industrial Corridor Development Corporation Limited (DMICDC) which is also a stakeholder in the project.

This link will reduce the time taken to reach the airport to just 55 mins and the trains are expected to run at a max speed of 160 kmph. Besides 2 stations in Gr. Noida and 1 in Noida, the Express  line will likely connect with the Badarpur station of the Delhi Metro’s Violet line and also with the Chhatarpur station on the Yellow line.

The Delhi Metro plans to build a regular Metro line between Badarpur and Aerocity in Phase IV of the Delhi Metro project, so it’ll be really interesting to see how the routes/stops are planned. I have a feeling that might turn out be Delhi’s first line with both an express and local service!

For more updates on the Greater Noida Metro, check out the Noida-Gr.Noida section of the TMRG.