East-West Corridor to be Included in Lucknow’s Phase 1

Good news for Lucknow! In a recent meeting between E Sreedharan, the Principal Advisor to the LMRC and Akhilesh Yadav, the CM of Uttar Pradesh, it was decided that the 12 km East-West corridor from Vasant Kunj to Charbagh will be included in the first phase of the project. The first phase currently only includes the under-construction 23 km North-South corridor from the Airport to Munshi Pulia.

As per E Sreedharan, “By including E-W corridor in the first phase of project, we will not require PIB’s clearance again for executing it. Since phase I got approved by PIB recently, we can conveniently include E-W corridor into it to fast-track the project and complete both corridors in time.”

Here’s a map I’ve drawn that shows the route of this east-west line in red: 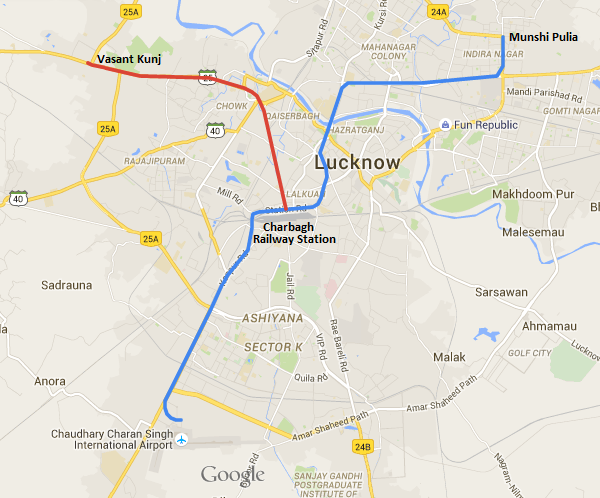 As per E Sreedharan, the LMRC will now only required the approval from the Union Ministry of Urban Development to construct the east-west corridor.  Out of 12 kms, roughly 6.5 km will be built underground for which the tenders will be finalized by March 2016. The line will have 12 stations of which 7 will be underground and the rest elevated.