As per a recent report, the land acquisition process for Mumbai Metro’s 33.5 km Line 3 (Colaba-SEEPZ) has begun and is making good progress. The MMRC now has possession of three out of five land parcels required in the suburbs. It has also received a No Objection Certificate (NOC) from the Maharashtra government’s Directorate of Sports and Youth Services department for taking over a part of Oval Maidan.

The following image on Mumbai Metro Rail Corp’s Facebook page suggests they will take over a small section on the southern portion of the maidan: 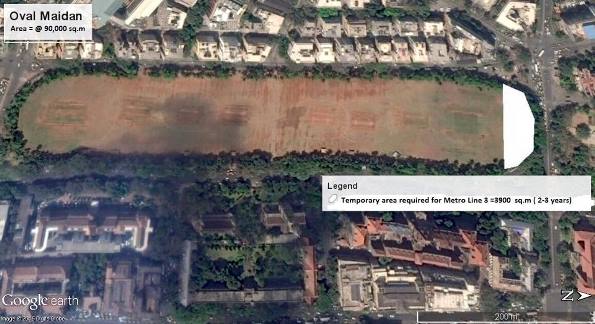 A total of 78 acres hectares are required for the project. The MMRC is first focusing on the low hanging fruit of state and central government land, but that also comes with issues in which the land is stuck in litigation. The state land is owned by a plethora of different departments while the central land is primarily owned by the Airport, Railways and SEEPZ. 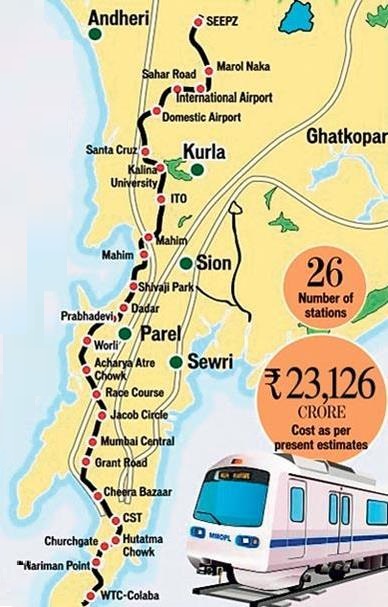 Meanwhile, the MMRC has also announced that all project affected persons (PAPs) slum dwellers will move to Slum Rehabilitation Authority (SRA) flats that are being built by HDIL at convenient locations. These slum-dwellers are located at various locations along the alignment of the metro corridor – BKC, Santa Cruz, Dharavi to name some. They will be rehabilitated as per the MUTP policy at Chakala, Kurla, Vidyavihar, Wadala and Oshiwara.

Apart from slum dwellers, residents living legally on private land will also be rehabilitated.  For the Kalbadevi and Girgaum Metro stations, the MMRC needs to demolish 26 buildings which will affect 737 families. To assist their rehab, the MMRC has appointed Catapult Realty to come up with a rehabilitation plan through which the residents will either be rehabilitated on single or multiple clusters. The draft plan is currently in the works and is likely to be submitted to the state government by November.

For more updates on the Mumbai Metro project, check out the Mumbai section of the TMRG!