As per a recent report, the Bangalore Metro Rail Corp (BMRC) plans to complete the land acquisition process for Phase II of the project by March when Phase I is expected to be ready. The process has already started and its progress was reviewed on August 7 by a “high-powered” committee meeting during which sticking to deadlines and speeding up the acquisition process was emphasized. 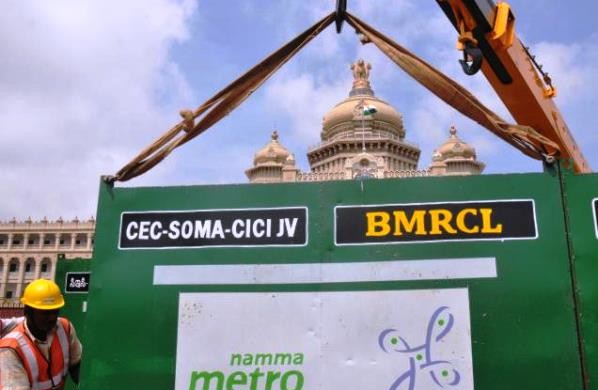 Barricade installation for the metro shot in 2010 – Photo Copyright: The Hindu

Just to recap, the 72.1 km Phase II has six reaches of which 2 are new lines while four are extensions of the existing lines.

For the new lines, the BMRC has issued a notification for land acquisition for the R.V. Road to Central Silk Board stations. This includes the Jayadeva Hospital intersection which will house a 5 level interchange for the two new lines (See: Details Emerge on Bangalore’s Jayadeva Interchange) that will intersect here. Similarly, a notification for land acquisition from Central Silk Board to Bommasandra including the depot at Hebbagodi has been issued.

For the latest updates on Bangalore’s Metro project, check out the Bangalore section of the TMRG!