The Delhi Metro Rail Corporation’s Managing Director, Mr. Mangu Singh, recently made a visit to the Indian Express’ office located in Noida. The exhaustive transcript along with video snippets of his talk attended by some journalists can be found here.

Here my thoughts on his talk:

1. What I found ironic is the sensational title that has been crafted from the actual response given by the MD:

Question: There have been many complaints with the new land Bill. How does Delhi Metro manage land acquisition?

Response: Fortunately, so far there hasn’t been any case where we require private land under the new Act (Land Acquisition, Rehabilitation and Resettlement Act, 2013), because we also believe it is almost impossible to acquire land under the new Act. Earlier, whatever land was required, it was acquired under the previous Act and we got it. There was an emergency clause and requirement of land was conceived as an emergency requirement. It was challenged many times in the courts, but the court finally said that for a project of such importance, if land is needed, it is an urgent requirement.

But, because of this new Act, we have started negotiating with the landowner directly. Under the new Act, the landowners are very happy with the scale of compensation. They are willingly coming forward to give the land. So we are tackling the problem on a case-by-case basis by approaching individual landowners.

While the title makes it seem like the Delhi Metro’s progress is being impeded by the new act, the underlined portion of Mr Singh’s response suggests that not only has the DMRC not used the new act, but they are also encountering low resistance due to the scale of the compensation being offered to the project affected persons (PAPs). 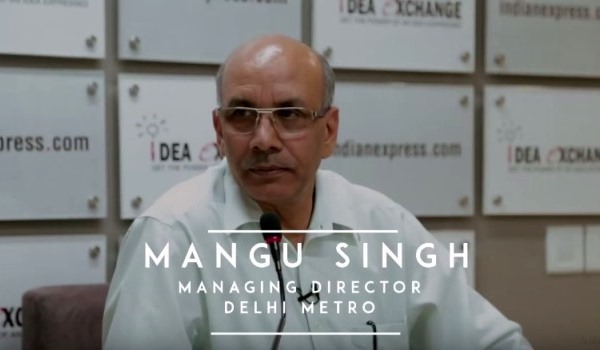 2. When it comes to the DMRC assisting Mumbai build its Metro network, Mangu Singh confirms that the DMRC will manage the execution of one of Mumbai Metro’s proposed lines. I had written about this “agreement” between the DMRC & MMRDA/CM of Maharashtra to fast-track the project a couple days ago (See: MMRDA Approves 4 Metro Lines Totaling 118 KMs)

Question: Can you tell us a little bit more about projects outside Delhi and Mumbai.

Response: Outside Delhi, in Jaipur, the first stage of almost 10 km is already open. Now 4 km is under construction. Then Mumbai line three, that is 33 km, is being undertaken. In addition to that, Maharashtra CM Devendra Fadnavis is very keen that some corridors be completed in the next few years and he has in fact approached us, that we take up one or two corridors there. But we have not taken a final call.

Question: Which corridors are these?

Response: He has given us a long list of under 20 km. I have been to Mumbai and visited all of them and suggested two corridors which can be competed in three-and-a- half to four years. One is on the Eastern Expressway and other on Link Road, parallel to the Western Railway corridor.

The “Eastern Expressway” line being referred to is Line-4: Wadala-Ghatkopar-Thane-Kasarvadavali which will primarily be built along the Eastern Express Highway and the “Link Road” line refers to part of Line 2 from Dahisar to DN Nagar for which the DMRC recently submitted a new Detailed Project Report (DPR) to the MMRDA. This section is part of the larger Line 2 which will run from Dahisar – Charkop – Bandra – Mankhurd .

3. The ban on photography comes from the security guys (read: CISF!) and not from the DMRC management.

Question: Why is photography prohibited inside the train?

Response: Truly speaking, even I don’t know why it is prohibited. In fact I have told my people to find out a way to relax the norm. Because even at the airport it (photography) is not prohibited. This (prevention of photography) has been done by the security agencies and we should go ahead in consultation with them. And nowadays, this rule is very difficult to enforce, as every mobile phone has a camera.

I’d recommend reading the entire interview for more nuggets on topics like the DMRC’s objection to JICA’s conditions to fund Phase 4, how DMRC plans the routes of new lines, thoughts on last mile connectivity and an introduction of congestion tax.