Bangalore Metro Gets Proposals from Developers for Dedicated Station Access

After the Bangalore Metro Rail Corp Ltd’s first Public-Private Partnership experiment with Mantri Developers to provide direct access to the Mantri Square mall in Malleswaram, many more developers are now approaching the BMRCL with proposals to connect their upcoming properties with the Metro network under the 72 km Phase 2 project. They’ve realized that a dedicated/direct entry and exit access link into a metro station becomes a footfall multiplier for shopping complexes, restaurants and even hospitals. This in turn would lead to a higher return on investment as developers can demand a premium from buyers looking for easy access to the metro.

Earlier the BMRCL was uncertain of the process for fixing the amount to be paid by developers for availing the metro facilities via a dedicated link, but with the large number of proposals making their way, the BMRCL has now started to lay down draft guidelines to streamline development and select the most viable ones for execution so that both the BMRCL & private developers benefit. 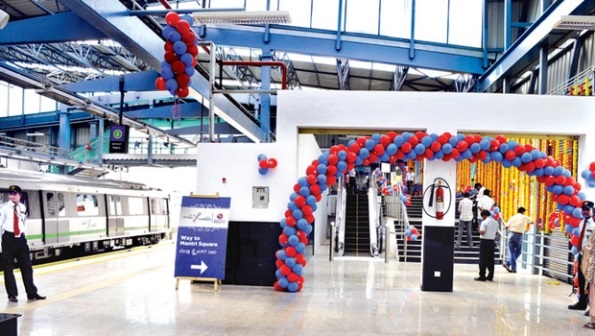 One of the proposals under consideration is to connect Prestige Falcon City, a high-rise apartment complex on Kanakpura road, with the Anjanapura Road metro station which will be built on the Green line’s 6.29 km southern extension to Anjanapura.

These proposals offer the BMRCL an excellent way to generate non-fare revenue and if the model is optimized, then it could turn out to be very lucrative for them as they’re currently operating with an approximately Rs 5,000 crore debt, primarily due to the loans borrowed to build Phase 1.

For more updates on Bangalore’s metro, check out the Bangalore section of The Metro Rail Guy!