Thing just keep getting better for Systra – a French firm that provides planning, design, engineering, and construction management services to metro systems all over the world. Just last week, Systra was appointed as the General Engineering Consultant for Ahmedabad’s Metro (See: Systra Led Consortium Appointed Ahmedabad Metro’s General Engineering Consultant), and now they’ve been selected to conduct a study and present a report for extending the Chennai Metro’s Blue line by 9 km from Washermenpet to Thiruvottiyur in north Chennai. This extension has been in the works since at least 2009, but only now have things started to move forward with this contract which is valued at Rs 28 crore.

This 9 km extension is expected to cost Rs 3000 crore and will have stations at Korukkupet, Tondiarpet, Toll Gate, Gowri Ashram, Thiruvottiyur and at Wimco Nagar. Out of these, the Korukkupet & Tondiarpet stations are expected to be underground while the rest will be elevated.

Here’s a crude route map which gives a good rough idea about the line’s extension (in red): 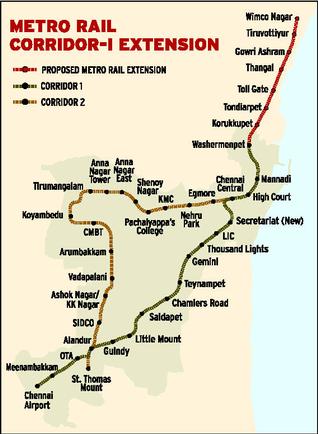 The state government has approved this extension of the Blue line and is now awaiting on the central government to approve & sanction the project through the Japan International Cooperation Agency (JICA) as the line will be cost intensive since it involves an underground alignment between Washermenet, Korukkupet & Tondiarpet.

According to a CMRL official:

The CMRL has also initiated the process to appoint a consultant for Phase 2 of the Metro project (See: Chennai Metro’s Phase 2 to Connect Siruseri) which will see 3 new lines between Madhavaram & Siruseri, Koyambedu to Light House and between Madhavaram and Perumbakkam. For more details, please see the link above.