Sept 25 Update – The PM’s Office has declined the invitation due to the PM’s non-availability.

Thanks once again to Mr. Rajendra B. Aklekar, my Twitter follower who’s most who’s most popularly known as the author of ‘Halt Station India’ for sharing this news with me!

As highlighted by the title, the Prime Minister of India, Mr. Narendra Modi, will be in town on October 4 to lay the foundation stone for 2 new Metro lines in the western suburbs:

Both lines can be seen in this map I’ve made below in red & blue colors: 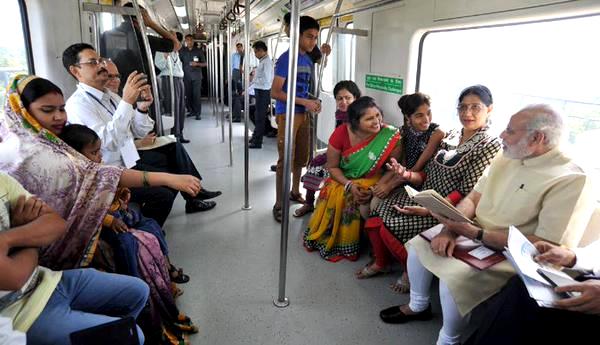 Narendra Modi inside the Delhi Metro on his way to inaugurate the Faridabad line earlier this month – Photo Copyright: Rediff

The PM was originally scheduled to only perform a bhoomipujan for a grand memorial of Dr BR Ambedkar at Indu Mills in central Mumbai, but the state government later sent a request to the Prime Minister’s office to invite the PM to lay the foundation stone for the metro lines at an event which will be hosted at the Bombay Convention & Exhibition Centre in Goregaon.

The pre-tendering approvals for both these lines are progressing at an unusually fast speed compared to what the city has witnessed in the past. As a reminder, the MMRDA approved the Detailed Project Reports (DPRs) for these lines earlier this month and the state government is in advanced talks with the Asian Development Bank to fund about 50% of the construction costs of these lines (See: ADB May Fund Mumbai’s Dahisar – DN Nagar & Dahisar(E) – Andheri(E) Lines). What’s reassuring and good to know is that the Delhi Metro Rail Corporation (DMRC) will execute either one of the two corridors and act as a consultant for the other.