Vijayawada will soon have a metro system! To celebrate the commencement of the project, besides chugging down my favorite beer, I’ve also added Vijayawada in the “Cities” drop-down menu of the website’s menu seen above.

Just weeks after being appointed as the consultant for Vijayawada’s metro project (See: Appointment Letter), the Delhi Metro Rail Corp (DMRC) has invited tenders for two sections of the 13.27 km elevated line-2 from Pandit Nehru Bus Station (PNBS) to Nidamanuru. The total cost of this line is estimated to be Rs. 3,148 crore and the depot for it will be located on a 25 hectare land parcel in Nidamanuru.

Tenders for the 12.76 km elevated line-1 from PNBS to Penamaluru will be invited at a later stage. 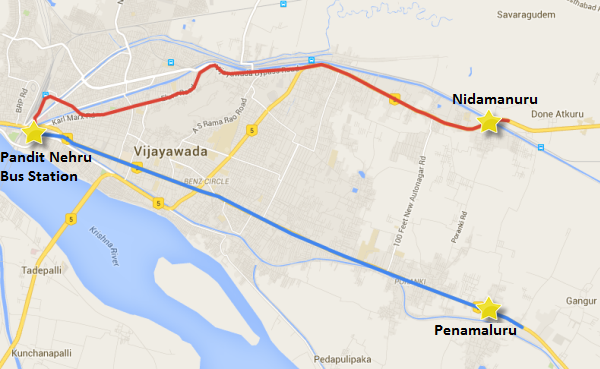 Contract AMCC-02 – The second notification invites tender for the design and construction of an elevated viaduct (km 1.338 to km 6.577) and five elevated stations at City Cancer Hospital, SRR Government College, Sri Sathya Sai Mandir, Besant Road and Railway Station East side. The cost for this section is estimated to be Rs. 314 crore.

Both of these sections can be viewed in the map I’ve made below.

DMRC has set November 20 as the deadline for submission of both the tenders. From the date of awarding the contract, civil construction on both sections is supposed to be completed in 24 months. Please note that the section from Railway Station East to the Pandit Nehru Bus Station is yet to be invited and will most likely be a part of Contract AMCC-03.

To execute & manage operations on the line, the Andhra Pradesh Government recently announced the formation of  ‘Amaravati Metro Rail Corporation’ as the nodal agency with a deadline of 2018. Since the DMRC is involved, I expect it to be executed in a hyper-fast mode, just like the Jaipur, Lucknow and Kochi metro projects. I’m excited!