The Mumbai Metro Rail Corporation (MMRC) recently issued a unique clarification in daily papers regarding its temporary use of the Colaba Woods Garden for building the underground Cuffe Parade station. From their earlier stance of taking over 25% of the garden and refusing to change their decision (see this article) , they’ve now craftily come up with a plan to hive off the garden into two parts in order to assuage the fears of who have been protesting since January.

For those not familiar with this area, the Colaba Woods is small 8 acre forest-like park in the affluent area of Cuffe Parade which features manicured gardens with antique benches, a jogging track and a small football ground. For fitness freaks, it’s essentially the Colaba version of the Priyadarshani Park on Napean Sea Road. 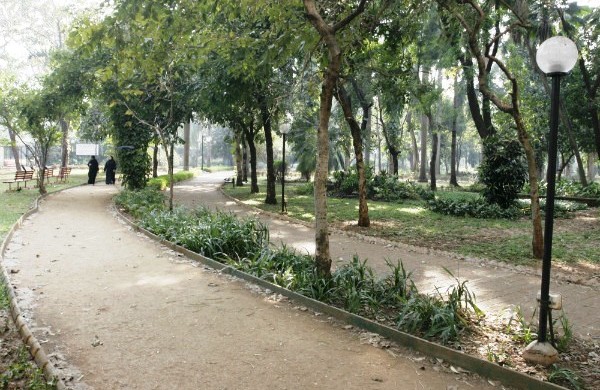 The proposed ‘Cuffe Parade station’ in this area will form the southernmost terminal of Mumbai’s 33.5-km Line 3 which will feature 27 stations. As per the initial technical drawings,  the MMRC had planned to build the 400 m x 25 m station box partly under Captain Prakash Pethe Marg and partly under the garden. When this plan was announced in January, it was met with resistance by the locals who feared large-scale cutting of trees which would alter the character of the garden. After a couple rounds of meetings between the locals and MMRC, here’s what the Managing Director of the MMRC, Ashwini Bhide, had to say in March:

We will not take up the entire garden. We will use only 25 to 30 per cent of it, and that too for a temporary period. Only a very small part of the land will be with us on a permanent basis. So, in a way, we won’t be hurting the open space.

Those who are protesting against the proposed Cuffe Parade station should understand that this development is needed and we just cannot change alignments. The site was finalised after a thorough technical study. So, there’s no question of changing the site or cancelling the underground station.

Now, after 6 months of deliberations which was not covered by the media except for that one article linked above, the MMRC suddenly issued the following public notice not just in Mumbai’s local papers, but other cities (like Delhi & Bangalore) as well. 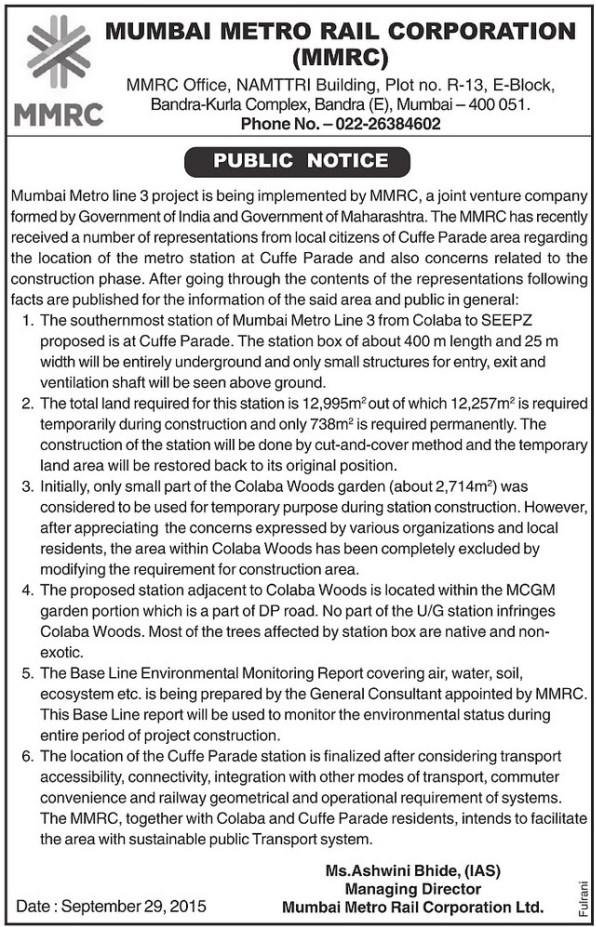 Out of all the points which the MMRC refers to as “facts”, #4 is the most interesting one. The MMRC has carefully studied the land records and hived the seamless garden into two pieces: (1) Colaba Woods which is marked as an ‘open space’ in BMC records and (2) a separate garden which is owned by the local civic body (MCGM). They’ve also then cleverly clubbed the MCGM garden section to be a “part of the DP (Development Plan) road” to make it appear that “Colaba Woods” only refers to the heavily forested core of the overall garden. Very crafty!

Given the fact that the MMRC will only temporarily take over the garden for 4-5 years and only keep a small patch for permanent use to house the underground’s ventilation & power structure, I do believe that the locals should allow the MMRC to proceed with their plans. The DMRC in Delhi has taken over multiple parks in the past for underground construction works, but has always returned them back to the locals in a similar or better state. With this public notice issued, I do hope this marks the end of the issue and Mumbai gets Line 3 as soon as possible.

For more updates on Mumbai’s Metro, check out the Mumbai section of The Metro Rail Guy!