Under Phase 1B of the Jaipur Metro project, the existing line is currently being extended by a distance of 2.35 kms from Chandpol station to Badi Chaupar via the Choti Chaupar station by a JV company comprising of Continental Engineering Corporation and their Indian division- CICI.

Earlier this week, citing cracks on the road near the Chandpole gate, many residents and and activists from heritage conservation societies protested against the metro authorities to stop construction work in the area. However, the Jaipur Metro Rail Corporation indicated that work will continue under the guidance of international experts with caution and nearly 12 prisms had been installed on both sides of the gate to keep a check on the vibrations. 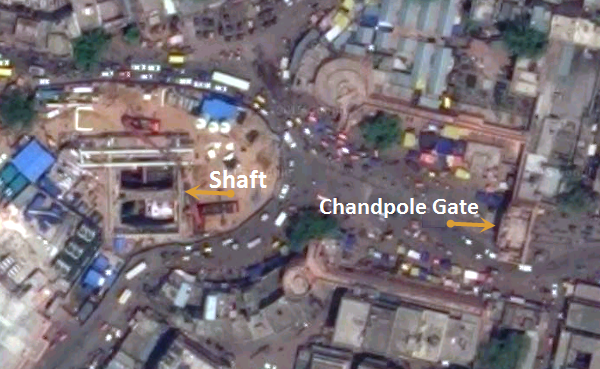 As per the Project Director Ashwani Saxena’s interview in the TOI:

The width of the gate is 8 metres. On Tuesday, the cutter head (front of TBM machine) reached half way, while digging will cross the gate by Wednesday. The work is being done in a cautious manner and revolution per second (RPM) is controlled. To dig a tunnel under the protected monuments or in a walled city area, a safety plan was earlier prepared by an expert company in Athens that was also approved by IIT Delhi.

According to JMRC officials:

• 10 crack meter and six strips of glass have been put on the gate to receive any information if the cracks widen.
• Eight multipoint devices have been installed at the depth of 2.5 meter and 5 meter. 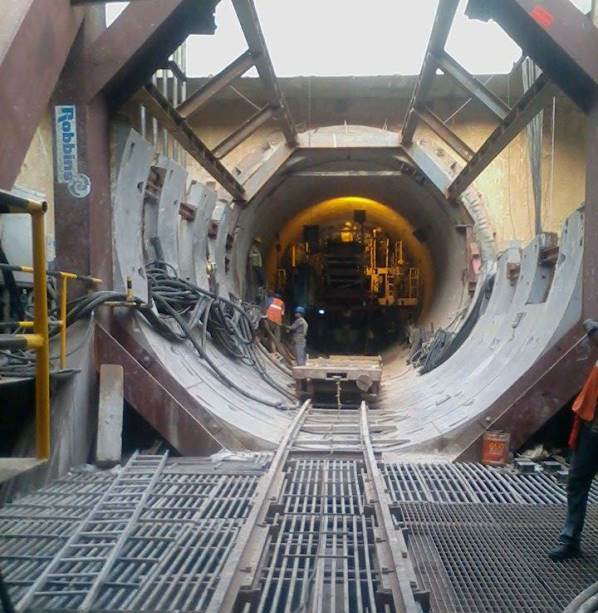 View of the TBM inside the tunnel towards Chandpol Gate: Photo Copyright: Navdeep Singh 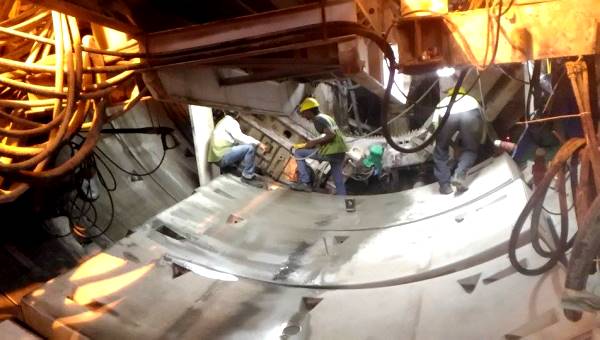 Workers help in the placement of segments in the tunnel towards Chandpol Gate: Photo Copyright: Navdeep Singh

According to the Environmental Impact Assessment available at the Asian Development Bank’s website, the predicted vibrations are expected to be the highest at Chandpole Gate along the route, but still the levels will be below the international guideline value:

The predicted Peak Particle Velocity (PPVs) on the PCRs was compared against limits set by various international vibration codes (Table 39) as the Government of India has not prescribed limits. The predicted vibration levels, the highest of which is at the Chandpole Gate is predicted at 0.682 mm/s during tunnel boring and 0.450 mm/s during metro 68 operation that are both below the guideline values reviewed as presented in Figure 2526 . Referring to Table 39A, even during operation the predicted level is lower than 2.5mm/s guideline value for structures with intrinsic importance. The predicted levels are also lower that the 2.0 mm/s recommended in DIN 4150 shock limit for ruins and buildings of historical interest

Going by what the project director mentioned towards the top of this post, the TBM would have already crossed the gate by now! And since I haven’t heard of any untoward major incident in the news over the past couple days, I can now continue drinking my beer.

For more updates on Jaipur’s metro, check out the Jaipur section of The Metro Rail Guy!