The Bangalore Metro Rail Corporation Ltd’s 9th Annual General Meeting held on September 24 at the Ministry of Urban Development’s Nirman Bhawan in Delhi discussed all matters pertinent to the Bangalore Metro – existing lines, financials along with the Phase 2 and 3. A PDF report covering it can be viewed here on the BMRCL’s website.

The report also includes the following note on Phase 2A of the project which envisages a link from Nagavara to the Kempegowda International Airport which opened for operations a little more than seven years ago in May 2008 (time flies fast, doesn’t it?)

Note on Phase 2A in AGM Report

Ever since the BIAL Airport was opened, many proposals have been made to connect it with either a regular metro line or with a high speed rail link with fewer stops similar to the one in Delhi. However, none of those options materialized due to a lack of consensus on the route and the financial viability of it. Even before Phase 2 of Bangalore’s metro project was cleared by the Central government in January 2014, the BMRCL issued a press note in June 2013 indicating they have engaged RITES Limited, an engineering consultancy firm, to prepare the Detailed Project Report (DPR) for Phases 2A and 3.

As per a report from earlier this year, RITES in their preliminary investigation had identified the following five routes to connect to the airport:

Fast forward 8 months, and now the AGM’s note indicates that RITES has now narrowed down to the following 2 routes which will be an extension of the new 21.2 km metro line between Gottigere & Nagavara in Phase 2:

Here’s a map I’ve made which shows both the routes: 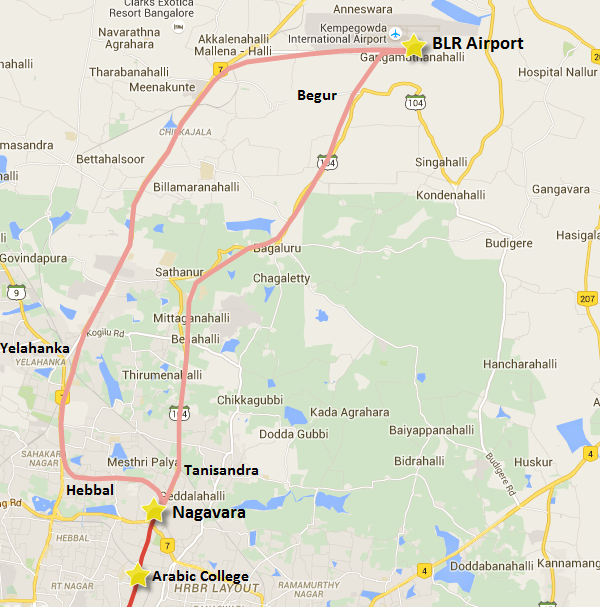 Note: The red line between Arabic College and Nagavara is part of the new 21.2 km metro line between Gottigere & Nagavara which will be developed in Phase 2.

So from 5 potential routes, it’s good to see that they’ve narrowed down to 2 options. What’s certain is that both routes will be designed to contain both elevated & underground sections. Construction of the elevated section will help bridge the gap quickly while the route will likely be underground within the Airport’s land & vicinity.

Even though this line is part of Phase 2A, it should not be mistaken to be an official part of Phase 2. Work on it will only begin once Phase 2 nears completion in 2020/21 and as such, a final alignment of the route will only be determined after  a Techno-Economic Feasibility Report is prepared and all politicians & stakeholders are on board.