About 6 months after Russian company Mosmetrostroy & its Indian JV counterpart Gammon abruptly pulled out of constructing the Government Estate to Saidapet section (contracts UAA-02 and UAA-03) of the International Airport to Washermenpet metro line due to rising costs, the Chennai Metro Rail Ltd (CMRL) plans to re-award the contracts by the end of this month!

The financial bids will be opened on October 19 and the CMRL will then type up and award the contracts on the same day. When Mosmetrostroy & Gammon deserted the project in May, it had sent the CMRL management into a tizzy, but they got to work right away. First they pursued the contractor to return & complete the work, but after receiving no positive response, they officially cancelled the contracts in July and issued notices calling for bids to complete the balance work in August. At that time, they had hoped to get work restarted work in January 2016, but now officials are aiming to have it restarted in December.  As per one senior official:

Many companies have expressed interest to take up the work. We have extended the date for opening of tenders from September because the companies who evinced interest wanted more time. We are planning to give the contractor 20 months to complete the work. This means the line under Anna Salai and the stations should be ready by the end of 2017. We are also planning to open the other completed stretches in phases next year. Anna Salai’s tunnels and stations will be the last to be completed

The CMRL will reward the two contracts as per the original scope:

Here’s a map I’ve made which shows these 2 sections: 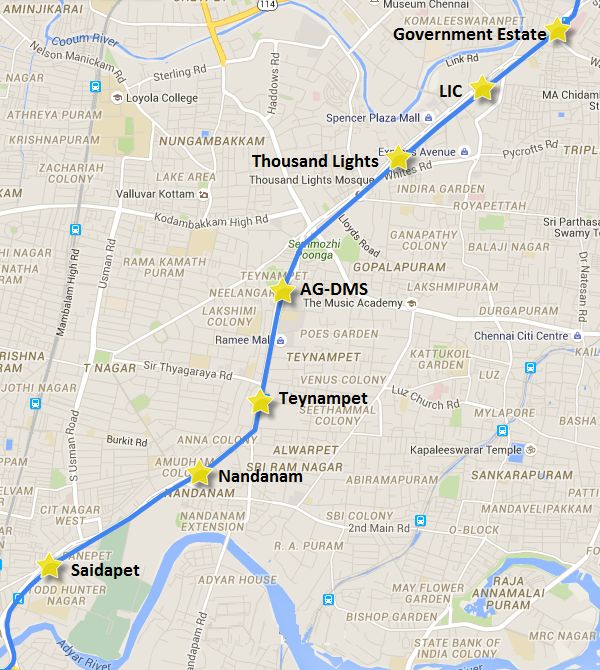 As a reminder, since only a few meters were left to construct one of the tunnels between AG-DMS and Teynampet, the CMRL had temporarily roped AFCONS to make a breakthrough on Sept 1 – see: TBM Makes Successful Breakthrough at Chennai’s AG-DMS/Gemini Station. With that breakthrough, all tunnels on UAA03 (AG-DMS-Saidapet) had successfully been completed.