While Mumbai Metro One Pvt Ltd (MMOPL), the operator of Mumbai’s Line 1 between Versova – Andheri – Ghatkopar,  is not required to publish ridership and revenue figures on its website or elsewhere, it is however required to respond to queries under the Right to Information act after a Maharashtra Information Commission in March 2015 brought it under its purview since MMOPL provides an important public service and has been built by the financial support of the government. 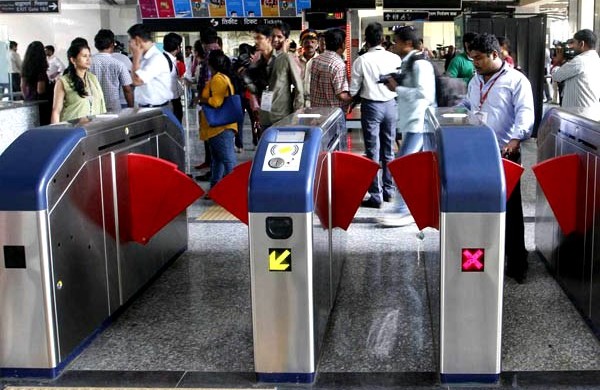 AFC Gates at a station on Line 1 – Photo Copyright: Prahaar

Recently in a reply to a RTI query, the Public Information Officer of MMOPL revealed the ridership & revenue figures for all quarters from July 2014 to September 2015, details of which have been published in some news reports like NDTV and DNA. These reports however exclude the quarter from March-June 2015.

Here are 2 charts which show how the revenue from fares has shot up while the ridership has largely stabilized: 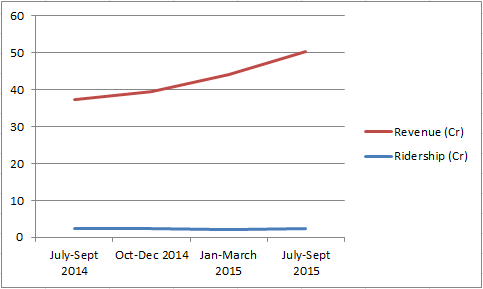 On closer inspection, the ridership actually took a hit in January-March 2015 as shown below: 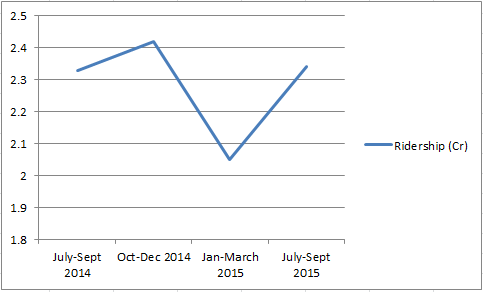 Comparing the July-Sept 2014 quarter with its 2015 counterpart, the ridership from 2.33 crores went on a roller-coaster ride and came back slightly higher at 2.34 crores, whilst the revenue (due to the fare increase) shot up from Rs.35 crores to Rs. 48 crores, reflecting an increase of 37%. The best quarter in terms of ridership was between October and December 2014 during which 2.42 crore trips were logged by commuters from which MMOPL was able to make Rs 37 crores.

Debashish Mohanty, a Director at MMOPL had this to say:

The number of passengers and fare box collection is constantly going up, partly due to longer destination passengers more often availing our services.

A MMOPL spokesperson had this to say:

It is a worldwide phenomenon that ridership decreases with an increase in fares. However, it is to the credit of Metro One’s excellent operations and services that the commuters have returned to Mumbai Metro and the ridership figures have gone up to the earlier levels. Accordingly, the revenues have also increased

While credit must be given where it’s due, the reason for such a high ridership is primarily because of Mumbai’s density,  strategic east-west route of this line and the overall connectivity between different modes of transport. Given the Metro’s relatively cheaper fares compared to auto-rickshaws & taxis, riding the metro is the quickest & least expensive option and it was only a matter of time before the ridership bounced back up.