As per Vasanth Rao who serves as Bangalore Metro Rail Corp Ltd’s General Manager for Finance, the financial bids have been opened for the Green line’s 6.29 km southern extension from Puttenahalli to Anjanapura in Phase 2 of the metro project! What’s more is that NCC (formerly Nagarjuna Construction Company) has published an advertisement (see image link in Naveen’s tweet below) in a local newspaper to kick-start its hiring process to staff key functions to facilitate this section’s construction. So even though Vasanth Rao hasn’t quite revealed who’s the lowest bidder, it’s fairly obvious that NCC is the lowest bidder and will go on to be awarded the contract.

@maddyvoldy the financial bid for R 4 extn has been opened. 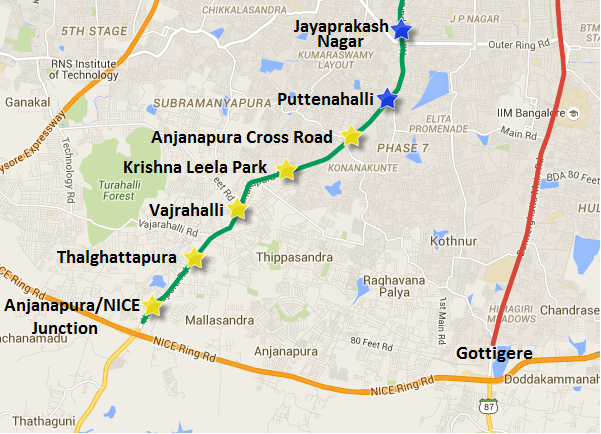 Alignment of the Green line’s Puttenahalli to Anjanapura extension

With this new development, I expect piling work to begin in 6 months from now! As a reminder, piling machines were recently brought on-site to carry out piling work on the 6.47 km Mysore Road –  Kengeri extension of the Purple line in western Bangalore.