The pre-construction activities for the development of Agra’s metro are progressing as per schedule!

Earlier this week, the engineering consultancy company Rail India Technical and Economic Service (RITES) submitted Agra Metro’s Detailed Project Report (DPR) to the Agra Development Authority (ADA). This fits right into the pre-construction time-frame that I had written about when the feasibility report was being prepared. The ADA will now examine the DPR and recommend suggestions for changes to RITES.

RITES in its DPR has suggested a 30 km metro network in Phase 1 consisting of 2 lines with a total of 30 stations. Of these, 11 stations will be underground while the rest will be elevated.

Here’s a map I’ve made which shows the alignment of both lines: 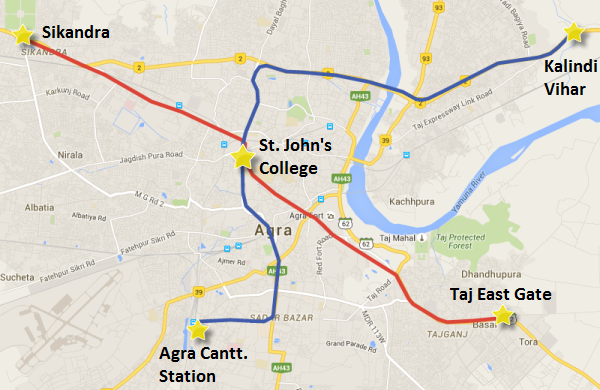 As per the DPR, 3-car trains will make 136 trips per day on the Sikandra – Taj line while 160 daily trips will be made between Agra Cantt & Kalindi Vihar. Since September, stations at Hing ki Mandi and Nehru Nagar have been replaced by stations at Sur Sadan and Shastri Nagar respectively.

Here’s a recap of the locations where the stations will come up which have been finalized after numerous site visits and discussions with local authorities & Agra’s commissioner:

With the DPR now in the ADA’s hands, the next step would be for the ADA to forward the DPR to the state government for its approval. Following that, a nodal agency A.K.A. Special Purpose Vehicle (SPV) along the lines of the DMRC, BMRCL etc will be formed for executing the project.