During a recent meeting with the Urban Development and Housing Department in Patna, Bihar’s Chief Minister Nitish Kumar gave his in-principle approval for the Rs 14,000 crore Patna Metro project!

While this approval really does not amount to anything significant as far as the project’s progress goes, it does indicate that the project has his full backing to ensure it progresses smoothly through all the hoops it needs to jump through at the state level. The project’s Detailed Project Report (DPR) for 2 lines has been prepared by RITES Ltd. and will very soon be placed before the state government’s cabinet. An approval from the cabinet is what will kick-start the project.

As per the DPR, two lines are initially proposed to be built in Phase 1. Their total combined length will be 27.88 kms of which 0.28 km will be on the surface (at-grade), 12.13 km elevated and the rest 15.47 km is proposed to be built underground. The depots for both lines will be located at Mithapur (line 1) and ISBT (line 2).

Here’s a map with both the lines: 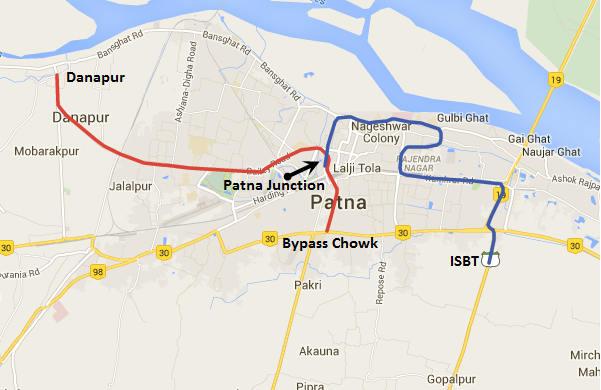 Once the state cabinet gives its formal approval, then a metro nodal agency along the lines of the DMRC & BMRCL will be formed. The nodal agency can then begin the tendering process while awaiting the union cabinet’s approval for their share of funding. If the state cabinet’s approval is received in the first quarter of 2016, then I expect actual construction work to begin by the end of 2016!

For daily curated updates on India’s metro systems, check out my Home Page!