The state government’s cabinet had on December 30 2014 approved new metro projects in Kanpur, Agra, Varanasi and Meerut to boost urban mass transport infrastructure in these cities. While doing so, they appointed RITES to prepare all 4 DPRs and the Lucknow Metro Rail Corporation (LMRC) to take a “coordinating” role to kick-start the necessary leg-work prior to their construction.

RITES in its DPR has suggested a 35 km metro network in Phase 1 consisting of 2 lines with a total of 31 stations. Of these, 11 stations will be underground while the rest will be elevated.

Likely alignment of both lines: 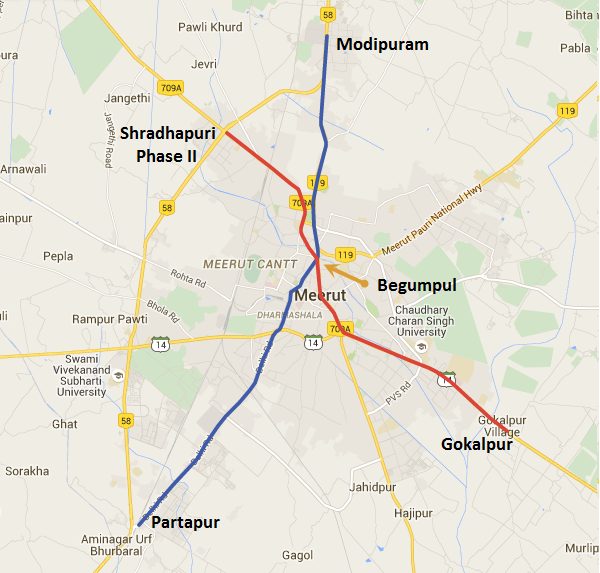 As you can deduce by now, the system’s interchange station will come up at Begumpul.

In a recent interview to the TOI, Vivek Bhaskar, the nodal officer for the project announced that existing bus depots will be moved to the city’s outskirts to make way for new metro stations & parking spaces. While that sounds horribly absurd to me (why would anyone dismantle existing transportation nodes?), they do plan to build the metro stations adjacent to the new depots.

We want to use government approved land. We are going to shift two major bus depots, ones at Sohrab Gate and the other at Bhainsali, to the outskirts of the city. Similarly, we will also shift the truck depot at Transport Nagar somewhere close to Baghpat Road. We need city streets to be free of heavy-vehicle traffic so that there is space for us to lay the metro line and build parking facilities at metro stations. We will ensure that there are metro stations near the new site of the depots. They can get off at bus stops and easily take the metro.

With the DPR now in the MDA’s hands, the next step would be for the MDA to suggest changes and then forward the DPR to the state government for its approval. Following that, the land acquisition process will begin and a new nodal agency/special purpose vehicle (SPV) along the lines of the DMRC, BMRCL etc will be formed for executing the project.