Over this past weekend, an unnamed “senior government official” from Delhi’s government made an announcement that an “in-principle approval for the construction of Metro Phase-IV ” had been given at a recently held meeting between the Chief Minister & different government departments. As expected, this sent journalists across the city to quickly type up asinine pieces and firmly plant an incorrect lovely idea in their readers’ minds that Phase 4 has been approved and construction will start soon. I received many joyous tweets and emails, but I hate to disappoint – this “approval” from the Delhi government and its portrayal by the media is absurd on multiple levels. Allow me to explain:

1. An “in-principle” approval amounts to nothing. It has no bearing, no outcomes or take-aways. What matters is the state cabinet’s formal approval in writing. People in Chennai who follow their metro’s development would remember how the Ministry of Urban Development gave multiple “in-principle” approvals over the course of 5 years for its 9 km extension to Wimco Nagar, and finally delivered the formal approval in December 2015. As soon as that came in, the CMRL kick-started its tendering process.

2. Barely 2 weeks ago on January 28 2016, the DMRC published a notice to a select number of Chief Project Managers (CPMs) to start surveys & preliminary works for their assigned corridors. The inputs from this work are expected to go into the Detailed Project Report. This notice can be be seen below: 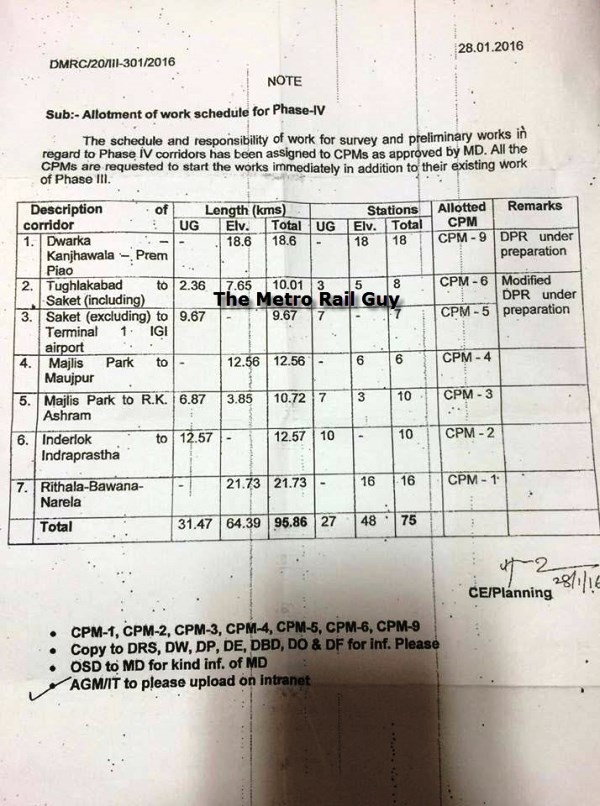 See: Map of what the alignment of these lines could look like here – DMRC MD Approves Survey for Modified 95.86 km Phase 4

On a different note, the above metro lines are the only ones currently on the table for Phase 4. It’s comical to see different media houses such as PTI News, The Statesman, The Economic Times & Business Standard still carry reports with Janakpuri West to RK Ashram and Lajpat Nagar to Saket G-Block lines as part of the chosen lines despite them being scrapped or truncated. See: DMRC MD Approves Survey for Modified 95.86 km Phase 4

3. The Delhi Metro Rail Corporation has not yet even prepared the final Detailed Project Report for Phase 4! DPRs for individual lines have either been prepared or an in a state of preparation. A final DPR which amalgamates all facets of this phase with specific details on all lines, their funding (very moot topic) and operational plan is yet to be prepared. Once that is done, it will be presented to the DDA, PWD and Urban Development Departments among others for their input, and finally to the state government for its formal approval. The Economic Times has published a direct quote from the same “senior government official” in support of this:

Once the Detailed Project Report (DPR) and financial proposal are received from DMRC, the matter will taken to the Delhi Cabinet for final approval so that the project can be completed at the earliest

To reiterate from my previous post on this topic,  There’s still a long way to go before all details of Phase 4 are finalized and approved. Currently, only 22.366 km out of the 159.327 km Phase 3 is operational. That’s just 14.03 percent and not enough for the DMRC to switch gears.

Once significant portions of the Pink & Magenta lines are operational in 2017, then the DMRC can be expected to finalize Phase 4’s DPR with:

1) Multiple changes in scope, alignment and design.  One of those changes in scope would include the addition of a new corridor connecting Dwarka with Gurgaon for which the DMRC was recently tasked with analyzing & preparing its DPR. Whether this will be an extension of the Airport Express line or the Blue line is yet to be seen.

2) A new funding plan that might not feature the Japan International Cooperation Agency (JICA) as they’ve expressed their unwillingness to assist this time around.

So until the final DPR for Phase 4 is prepared and the state government gives its approval in writing, all these little ‘in-principle’ approval announcements from the government with no DPR in their hands will remain meaningless and absurd.