With an eye on the upcoming state assembly elections, Kerala’s state government has decided to lay the foundation stones for Thiruvananthapuram and Kozhikode’s elevated metro projects on February 28 and 29 respectively!

Although both projects are still awaiting an approval from the Ministry of Urban Development for the Centre to provide 20% of the funds, the Delhi Metro Rail Corporation (DMRC) which last month signed an agreement with the Kerala Rapid Transit Corporation (KRTC) to provide interim consultancy services has already gotten down to work. Their personnel in both cities have started the necessary pre-construction legwork of preparing tender documents and estimates for shifting utilities, land acquisition, construction of the civil structure and procuring rolling stock. 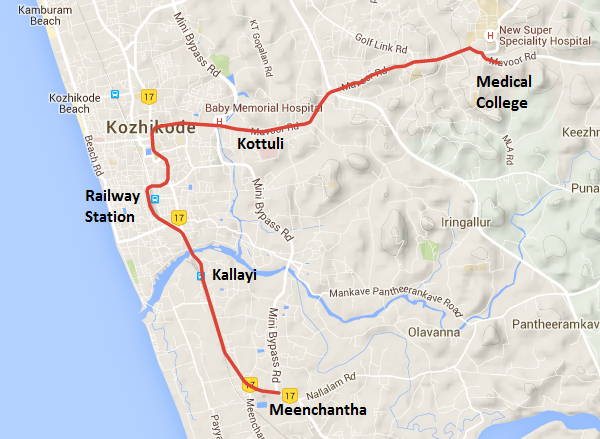 Both systems are being designed to carry up to 25000 people per hour per direction traffic (PHPDT) and will feature smaller than regular coaches with a lower axle load which will allow them negotiate sharp curves and steep gradients. As such, they’ve been termed and categorized as ‘light’ metro systems.  In January, the Minister of Urban Development Venkaiah Naidu revealed that the DMRC was working on a ‘Light Metro’ design which is 70% cheaper than conventional designs, but no further details were provided. As per a DMRC official who I’m friends with, instead of 2 levels (concourse & platform), the elevated civil structure will feature only one level with the concourse area on either side of the platforms. Whenever more design details are revealed, I’ll make sure to slap them in a post.

For more updates on both these projects, check out the Thiruvananthapuram and Kozhikode sections of The Metro Rail Guy!