On this Monday, when the second round of trial runs were being performed between the 6 km Muttom – Edapally stretch of Kochi’s Metro, the land acquisition wing of the Kochi Metro Rail started demarcating land that needs to be acquired for Phase 1B of the project! In this phase, a new 11.2 km spur line will be built to connect the under construction Jawaharlal Nehru (JLN) Stadium station with the proposed Infopark II station in Kakannad.

This spur line was approved by the state government in May 2015 and peg marking along its route began in July 2015. In January 2016, the State Cabinet gave its administrative sanction of Rs. 189 crore for preparatory works which includes widening roads and acquiring 8.65 acres of land at an estimated cost of Rs 140.68 crore.

Note: The DMRC-KMRL agreement signed in May 2013 will expire in 2017, so this line will be executed solely by the KMRL. They will most likely hire General Consultants to assist with its development. E Sreedharan recently made his and the DMRC’s role clear in an interview to the Malayala Manorama:

Once the ongoing construction ends, the DMRC office in Kochi will stop functioning. It is not right to rely on DMRC always. New companies should come up. KMRL can take the metro forward on its own. It has been structured that way.

This line (in red below) includes 10 new stations at Palarivattom Bypass, Chembumukku, Vazhakkala, Kunnumpuram, Kakkanad Junction, Kochi SEZ, Chittethukara, Rajagiri, InfoPark I, and InfoPark II. Some of the important ones have been marked below: 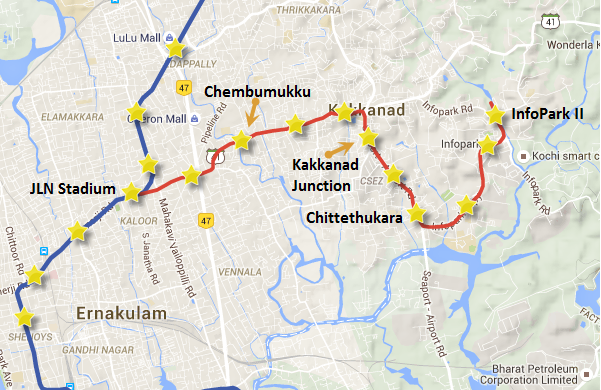 Land acquisition is the biggest hurdle in this project due to narrow roads, especially between Chembumukku and Kakkanad Junction. Once this is completed and the Muttom-Edapally section of Phase 1A commences operations (see 10+ images of trial runs), I expect the Kochi Metro Rail to begin the tendering process in 2017 for appointing a detailed design consultant followed by civil construction contractors.