This agreement was only a matter of time… 🙂

Yesterday, Prime Minister Narendra Modi presided over the signing of a loan agreement for Lucknow’s Metro between Manjeev Singh Puri, Ambassador of India to Belgium & Luxembourg and Jean Claude Juncker, President of the European Commission at the 13th India-EU Summit! The €450 mn (Rs 3381 cr) loan is the largest transport loan by the European Investment Bank outside of Europe in recent times and will be disbursed in tranches over the course of the project.

The loan’s proceeds will go towards the development of Lucknow’s 22.878 km north-south line 1 for which the state government has provided funds of its own till now to rapidly develop a 8.48 km priority corridor between Transport Nagar & Charbagh stations. To view construction images and bidding news from other sections of the line, see the Lucknow section of my site. 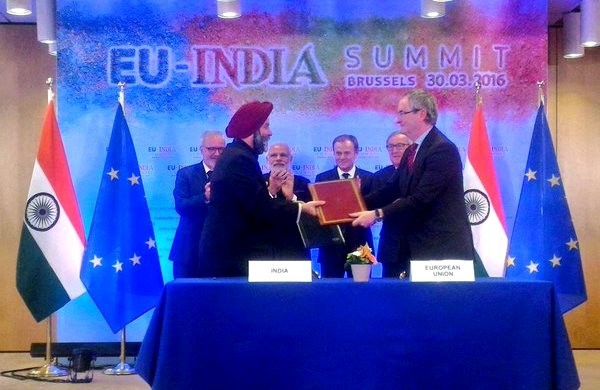 Here’s a tweet from Vikas Swarup, the Official Spokesperson of India’s Ministry of External Affairs:

Excerpt from a press release by the EU:

The leaders welcomed the European Investment Bank’s (EIB) commitment to support long-term investment in infrastructure crucial for environmentally sustainable, social and economic development in India, and in particular the EIB’s loan of €450 million in the construction of the first metro line in the city of Lucknow. The EIB and the Government of India signed a first tranche of €200 million.

Although the agreement goes into effect now, representatives from the Lucknow Metro Rail Corporation have been in constant touch with EIB officials and obtaining their approval prior to beginning any bidding process, opening financial bids or awarding capital intensive contracts. This includes the 80 coach Rolling Stock contract which was awarded to Alstom India and the upcoming contract for the 3.44 km underground section which will be awarded to Tata – Gülermak JV in the coming weeks.

In more exciting loan agreement related news, Germany’s KfW will sign a 500 million (Rs. 3756 cr) loan agreement for Nagpur’s Metro with India’s Finance Ministry in Delhi on April 1! Once that is done, I expect the NMRCL to award the construction contract to build the 10.04 km Reach 3 of Nagpur’s Metro from Lokmanya Tilak Nagar to Rani Jhansi Square on the 18.557 km east-west line.