Delhi: 2 Slums on Pink Line’s Alignment to be Removed by August

This is the most significant piece of news this week!

Last year I had written about 3 places in Delhi where land acquisition for the 58.59 km Pink Line was still not complete due to the Delhi Government’s hand-off approach in rehabilitating slum dwellers at 2 of these places, namely Punjabi Bagh & Mayapuri in west Delhi. The government insisted that it was busy in coming up with a new Rehabilitation and Resettlement policy in order to be fair and make sure the right beneficiaries become eligible for permanent housing. This new policy finally came through late last year, but was not enforced right away.

Now here’s the good news. Yesterday, the Chief Minister of Delhi finally woke up and ordered the Delhi Urban Shelter Improvement Board (DUSIB) to rehabilitate residents at both slums to the economically-weaker-section (EWS) flats in Baprola, just north of Najafgarh. 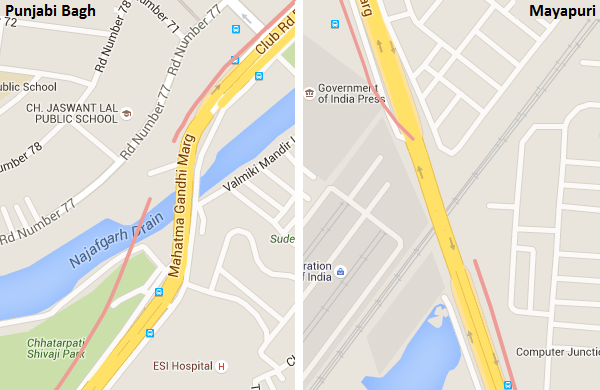 As per VK Jain, CEO of DUSIB:

DUSIB will relocate slum dwellers by August. It was decided that DMRC’s case would be taken on priority as it has been stuck since 2013. In the last survey conducted in 2013, as many as 23 slums were identified as high priority zones. But, only 47 per cent of the dwellers were eligible. Under the new policy, which has January 1, 2015, as the new eligibility cut-off date, 90 per cent people will be covered. (The Hindu)

L&T officials from the CC-28 project and Mangu Singh, DMRC’s MD, have always maintained that they would need just 4 months to wrap construction up once the land is handed over to them. If things with the rehab go as planned, then the completion of the balance work at these 2 sections by New Years will very nicely coincide with the completion of the Majlis Park – Azadpur section’s tunneling works which were recently revived after 2 years. With the last few pieces of the puzzle now falling in place, I now expect trial runs on the Mukundpur – Lajpat Nagar section to begin in the 1st quarter of 2017.

Now hopefully the last major issue at Trilokpuri is quickly resolved as well. That one is slightly trickier and sensitive.

For more updates on Delhi’s metro, check out the Delhi section of The Metro Rail Guy!

6 Responses to "Delhi: 2 Slums on Pink Line’s Alignment to be Removed by August"