Just a little more than a week after the Ministry of Urban Development gave its final approval for the 9 km extension of Chennai’s Metro from Washermenpet to Wimco Nagar, the Chennai Metro Rail Corporation has gone ahead to award Afcons Infrastructure with a contract to construct the 2.4 km UAA08 underground package from the under construction Washermenpet station to Korrukupet!

Bids for this package were invited in December 2015 and includes the construction of approx 1500m of twin tunnels, 2 new stations at Sir Theagaraya College & Korrukupet, and a ramp between Korukkupet and Tondiarpet. Financial bids were opened in March this year, but the contract was put on-hold owing to the local state legislative assembly elections in May & a pending final approval from the MoUD for financing it. 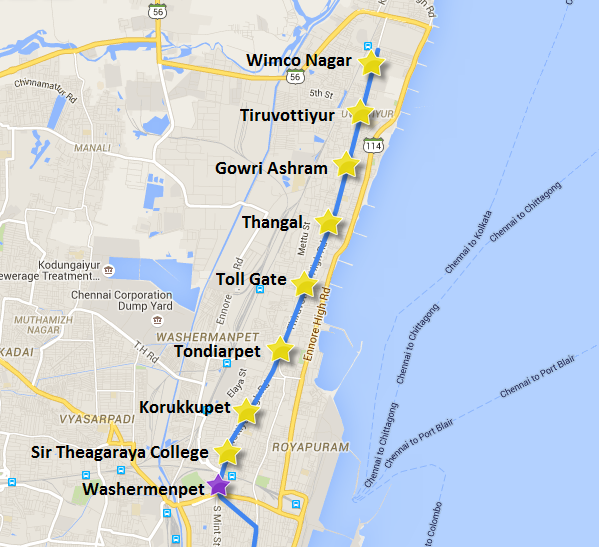 Barring UAA04, Afcons Infrastructure has had a role to play in all underground packages of Chennai’s Metro. They were awarded contracts for UAA01 & UAA05 in 2011, roped in to make a final breakthrough for UAA03 in September 2015, and were last month awarded the balance tunneling work for UAA02.

Ground work is expected to begin once land acquisition is complete for the two stations & the northern ramp. In February, local students from Sir Theagaraya College protested against their college grounds from being temporarily taken over for constructing a station. Since then the CMRL has engaged in talks to assuage the fears of nearby residents & property owners whose land will be acquired.

In the coming months, I expect the CMRL to invite bids for the roughly 6.6 km elevated portion of the line from Tondiarpet to Wimco Nagar. The entire stretch from Washermenpet to Wimco Nagar is expected to cost Rs 3,770 for which the Central Government will provide Rs 713 crore & the Government of Tamil Nadu Rs 916 crore. The rest of the funds will come in the form of loans from foreign & domestic lending agencies.