In Phase 3 of the Delhi Metro project, the Delhi Metro Rail Corporation has designed a one of a kind elevated stabling yard to house the 38.235 km Magenta Line’s new Hyundai Rotem trains! This 1.3 km long facility is being built by Afcons Infrastructure under package CC-90, and is located just off of the Kalindi Kunj Depot where the DMRC faces space constraints.

The yard’s deck abuts the Magenta Line’s viaduct at a height of 13-14 meters above the ground and ranges from 30 to 40 meters wide with a capacity to house 27 trains. The DMRC at one point mentioned plans of another elevated stabling yard to augment & support the Kalindi Kunj Depot, but hasn’t revealed any further details about its location or construction timeframe.

Here’s a satellite view of the under construction yard with imagery from earlier this year. You can use your mouse to follow and view other sections of the yard: 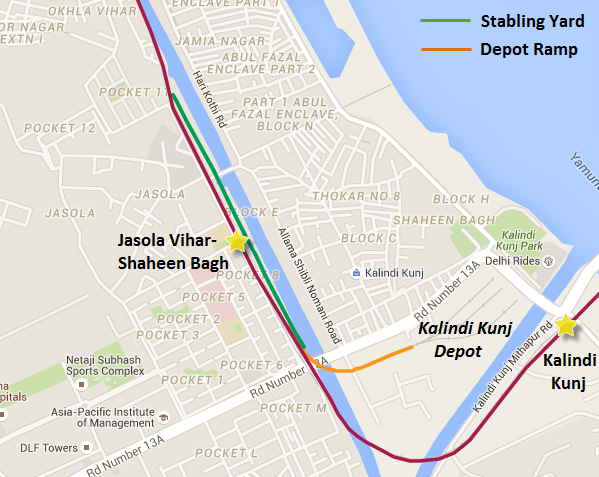 Some images shot in April & May: On a side note, the western half of the under construction Pink Line’s Vinod Nagar Depot will consist of a double-decker stabling yard. Unlike the elevated Jasola Vihar stabling yard, lines over there will be laid out on both levels with 9 lines at the ground level and 11 on the deck.