I shared this news on Twitter the other day, but felt this win needed wider coverage. 2016 for Kolkata’s metro has been one of the most exciting years in recent memory and this news just adds to it.

As per a report in the Telegraph India, a 500 meter stretch of the 15.75 km Joka-Esplanade metro line will soon be free of encroachment courtesy of the West Bengal government’s decision to intervene and persuade 12 commercial units to move out!  The encroached stretch is actually about 275m long, but nonetheless, the units on it have been blocking the construction of the line’s viaduct connecting to the depot for over 5 years now. Work for this line was inaugurated by the then President Pratibha Patil on September 22, 2010 and the construction contract for its elevated viaduct (Joka-Majerhat) was awarded to Simplex Infrastructures on December 28, 2010.

These units, like the 8 apartment buildings in Mahishbathan on the 32 km New Garia-Airport line’s route, came up after the route was finalized and the land for it, from the state irrigation department, had been acquired in 2011. The Indian Railways has since then been trying to free this stretch and even got the Calcutta High Court involved, which ordered the owners to move out last year, but they refused to do so. Fast forward to this Monday – Kolkata’s Mayor Sovan Chatterjee announced that the owners have finally agreed to fall in line and the structures on the line’s way will be razed in two months.

Satellite imagery of where the depot line’s viaduct abruptly ends due to encroachments: 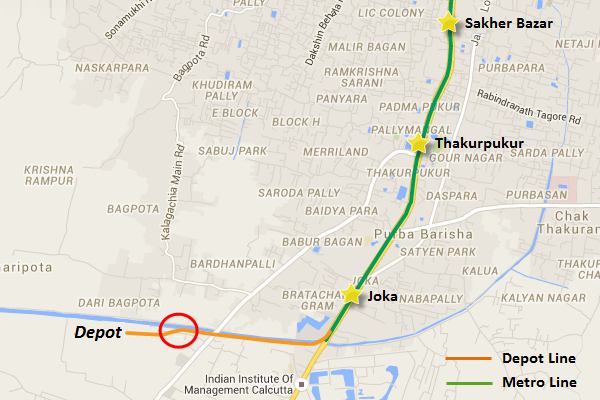 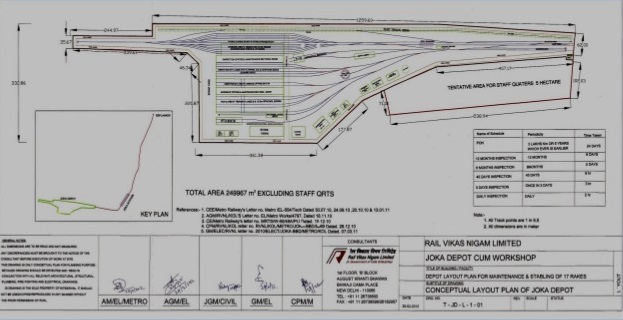 But that’s not the end of trouble for this line. Land for the depot’s construction is also not in the railways’ possession as the owners have so far refused the compensation offered to them. Just a few weeks ago, the Central Government published a new notice in The Gazette of India to acquire the requisite land. If things work out this time around, then groundwork for both the depot and the viaduct leading up to it should start towards the end of the year.