Looking at the ever-increasing current & projected ridership of the Bangalore Metro, the Bangalore Metro Rail Corporation on October 1 invited bids to integrate and convert its existing 3-coach 50 train fleet into 6-coach formations to provide more capacity & convenience to commuters. The notice was published after the Agence Française de Développement (AFD) approved its funding and bidding parameters.

All stations on the Phase 1 network are 135m long and were designed keeping this conversion in mind. Of the existing 50 3-coach trains supplied by the BRMM consortium led by BEML, roughly 30 are currently being utilized for operations on the 2 operational lines which total 30.3 km. The remaining trains will be pushed into service once the rest 12 km of the Green Line in Phase 1, from Sampige Road to Yelachenahalli (erst. Puttenahalli), opens in 2017-end (estd.) 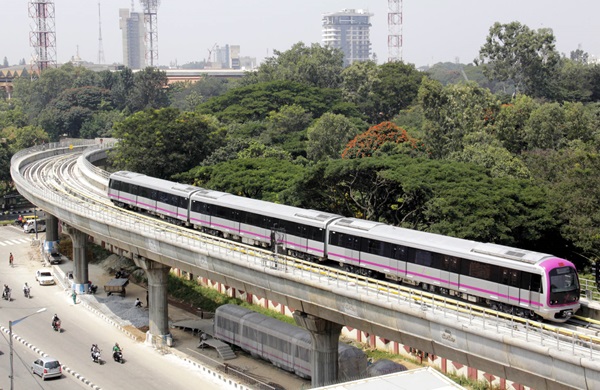 SUPPLY OF 150 Nos. STANDARD GAUGE INTERMEDIATE CARS AS PER REQUIREMENTS OF BMRCL COMPATIBLE WITH AND SUITABLE FOR INTEGRATION WITH EXISTING TRAINS OF BANGALORE METRO RAIL PROJECT PHASE-I PROCURED UNDER CONTRACT No. 2 RS-DM – Link to Notice

As per the instructions to the bidders:

The bid documents consider one unit to comprise of 2MC & 1TC(─MC + MC ─TC─) coaches and stipulate that only one unit can be manufactured in an off-shore facility outside of India and the remaining must be manufactured in the country. For those interested in the government’s ‘Make in India’ initiative and how it compares to the previous contract, this stipulation is better than the RS1 contract where the first 15 coaches (5 units) were built at Hyundai Rotem’s plant in South Korea while the rest 135 (45 units) were built at BEML’s facility in Krishnappa Garden, Bangalore.

Bids must be submitted to BMRCL’s office by 3pm on 30th November 2016 following which they will be opened and evaluated on general evaluation and technical parameters. Once that phase is complete, then the financial packages of the qualified bidders is expected to be opened sometime in early-mid 2017.

Although the bidding notice doesn’t specify the contract’s duration, the first unit of 3 new coaches is expected to be manufactured in 12-15 months after which it will be put through testing – first at the manufacturer’s facility, then at one of BMRCL’s depots’ test tracks followed by testing on the actual line during non-revenue hours. As such, I’m expecting the first 6-coach train to be inducted into service no sooner than 2019. Delivery for the entire 150 coaches is dependent on the schedule laid down by the BMRCL but is also influenced by the supplier’s production line and can take up to 3-5 years to complete. For reference, the BRMM consortium won Bangalore’s contract in February 2009, delivered its first train in October 2010 and the last train in May 2014. Looking at this and other orders around the country, I’m expecting all 50 trains to be converted into 6-coach trains sometime in 2021.

As for cost, BMRCL’s MD has stated the BMRCL & AFD have budgeted Rs 1,350 crore for this project assuming each coach will cost Rs 9 crore. Even though no Driver Motor Cars are being ordered, this figure seems a little on the low side, and I expect the final order to be around the Rs 1,600 crore figure.

Final thoughts – The ‘crush load’ capacity of 3-coach trains specified for all Indian metros is 975 (inhumane in my opinion) and will double up once the conversion is complete. Ridership is on the rise (roughly 1.5 lakh/day utilize the service with highs of 1.9 lakh/day) and will significantly rise once the entire Phase 1 is complete in 2017-end (estd.) with some estimates suggesting an initial ridership of 5 lakh/day. With Phase 1 expected to open in about a year’s time, I do not believe the BMRCL will be equipped to handle passenger loads once it goes live. As witnessed in Delhi, this is bound to put off a fraction of passengers from using its packed services and return to other public & private modes.

As seen in Delhi where multiple intermediate orders have been given to convert coaches into 8 and 6 coaches (eg RS-9, RS-13), there is likely to be only one bidder for this contract (BRMM-BEML) as the coaches are required to seamlessly integrate with the existing stock. So you might ask – why is the bidding required in the first place? Without in-built provisions to order additional items in the future, all items sought by metro organizations must go through a competitive bidding process to maintain transparency as required by the loan agency. This is not just limited to high value items, but also includes office rentals, insurance policy, retail licenses and everyday items like stationary & photocopying services – see the BMRCL’s tender page for all items/services currently sought.