The Bangalore Metro Rail Corporation last week submitted its final Detailed Project Report for Bangalore Metro’s Phase 2A project to the Karnataka Government. This phase involves the construction of a new 18 km metro line linking Silk Board Junction to KR Puram with more than 12 stations along the eastern half of the Outer Ring Road. This news was revealed by the Principal Secretary to the Chief Minister, L.K. Atheeq, who tweeted this over the weekend: 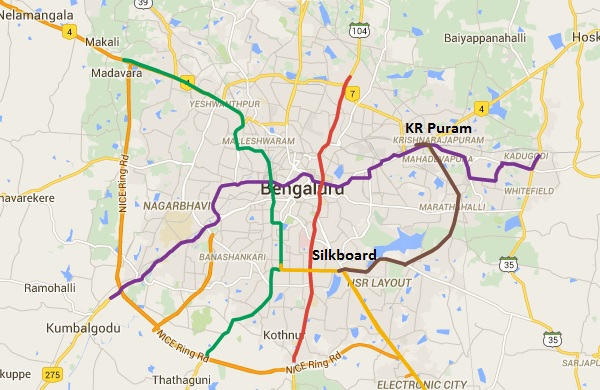 A preliminary list of stations with their locations can be viewed here.

As per Pradeep Singh Kharola, the BMRCL’s MD, the BMRCL used in-house resources to prepare the DPR in only 4 weeks. The DPR and financial outlay/split, backed in part by corporate funding, is likely to now be taken up for discussion during the state cabinet’s next meeting. Once approved, further details like the project cost, number of stations, alignment of the viaduct and depot’s location will be revealed to the public. Whenever that is done, the land acquisition process can be expected to start and the DPR will be then be submitted to the union government for its cabinet to approve.