The Kolkata Metro Rail Corporation is about to commit the biggest crime in the city’s mass transit history and there hasn’t been a single voice condemning this move, perhaps because people just aren’t aware of what’s transpiring behind the scenes. Needless to say, I’m not too pleased.

Now for those unaware, ever since the line’s underground section got realigned in 2015 to connect to Esplanade instead of Central station, a crucial underground metro station serving the surrounding historic neighborhoods of Bowbazar and Taltala was planned to be built here. However, since several more adjacent buildings would have had to be acquired through a long, drawn-out process, the KMRC recently dropped the idea of constructing the station all together in a scramble to meet the new June 2018 deadline – a criminal move. 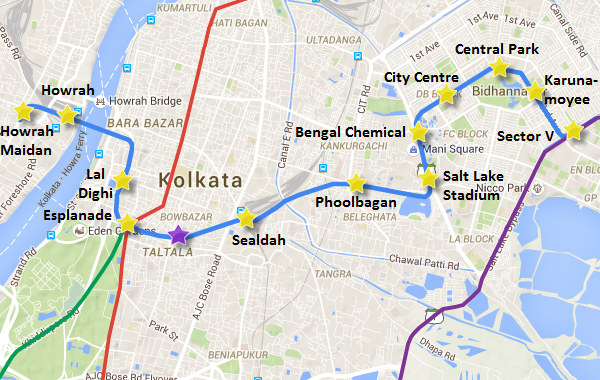 There are various differing opinions by mass transit designers (like this and this) on ideal station/stop spacing, but all would agree that 2.3 kilometers, the distance between the adjacent Esplanade & Sealdah stations, smack in the heart of a dense city would create a massive coverage gap and rob the neighborhood of not just an important station and greater accessibility, but the opportunity for its residents to be connected to the expanding metro network.

Such a miserable short-sighted decision by the Kolkata Metro Rail Corporation shouldn’t come as a surprise though. Things in the city have always been slow, but things considerably slowed down further between 2012-2016 during which the acrimonious Ministry of Railways took control and picked up a 74% stake in the organization to resolve issues at Howrah and Sealdah railway stations. Since then, the KMRC’s MD and officials have been slow to take important decisions, approve plans, disburse payments, look for alternatives and liaise with contractors to keep them in check, even on the elevated section where there aren’t any major issues barring the now-resolved Duttabad stretch.

A similar situation arose in Delhi in 2013 where ‘experts’ suggested the DMRC’s MD to drop the 59.6 km Pink Line’s Ashram station. Instead of doing that and creating a large network gap, the MD had the entire station redesigned to fit within the confines of the available land. Tunneling to and from that station just got completed on this past Monday and will be ready for commercial operations in 2018.