This is big news for Navi Mumbai. After several rounds of design submissions & rejections over the course of 3 years, the City and Industrial Development Corporation (CIDCO) has finally received an approval from the Central Railways Zone of the Indian Railways for constructing a steel bridge over the Diva-Panvel railway line’s tracks. This roughly 100 meter bridge will connect Sector 34 and Panchanand stations of the 11.10 km Line-1, and without it, metro trains wouldn’t have been able to reach or serve 90% of the line.

As per SR Darade, Chief Engineer of Special Projects at CIDCO:

We have received the approval to construct the bridge over the Diva-Panvel line of the Central Railway. Construction work will start soon. The design submitted by CIDCO has now been approved by the CR, paving the way for fast completion of the project. As the section is busy and used by a number of trains (example Rajdhani Express to Delhi), CR ensured that the design and quality of the bridge is strong and technically sound.

Satellite imagery of the site: 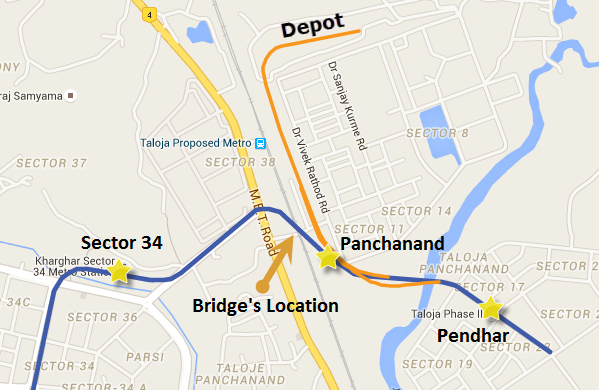 With this fantastic development, it’ll take at least another 9 months for the bridge’s parts to be fabricated, tested and moved on-site following which I expect it to be launched in 2018. Now only 1 major hurdle stands in the project’s way at Belapur-Kharghar where some high-tension wires need to either be moved or have their height extended. Hopefully that is resolved soon as well.

For more updates, check out the Navi Mumbai section of The Metro Rail Guy!