The Delhi Metro Rail Corporation recently published a notice on their website inviting tenders from rolling stock manufacturing companies to supply 54 coaches for Vijayawada’s 26.03 km metro project. This notice to kick-start the bidding process of a major technical system is an excellent indication that a loan deal has been struck or understanding has been reached between the Amaravati Metro Rail Corporation (AMRC) and France’s Agence Française de Développement (AFD) which has shown keen interest in the project over the past 6 months. 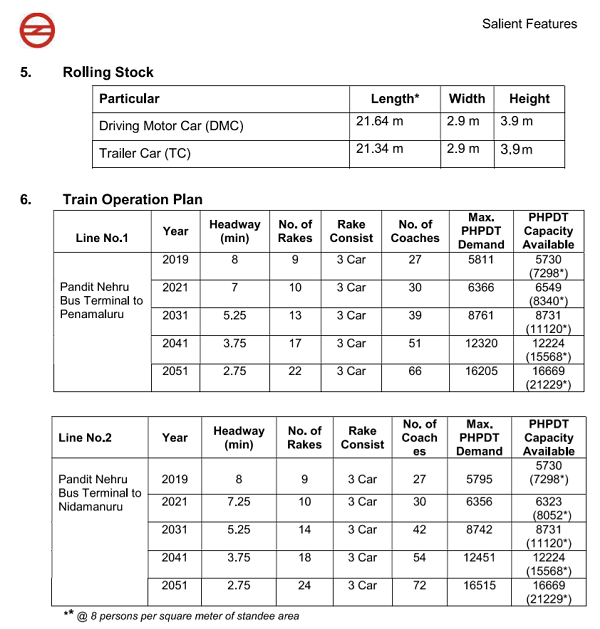 As mentioned above, the trains will be 2.90 meters wide (similar to Kochi Metro’s trains) and will initially run in a 3 coach configuration (Driving Motor Car + Trailer Car + Driving Motor Car) which can later be extended to 6 coaches when required.  The 3-coach trains are expected to have a capacity of 450 passengers under normal conditions and 764 under crush conditions.

Tenders/bids by rolling stock manufacturers have to be submitted by 11 am on June 2 2017 after which the bids will be opened and & first evaluated for eligibility at 11:30 am. A metro coach can cost anywhere from Rs. 8 crores to Rs. 12 crores, so I expect the rolling stock package’s contract value to be somewhere in the range of Rs 500 to Rs 650 crores.

For more updates, check out the Vijayawada section of The Metro Rail Guy!