Phase 3  just got a little longer!

The Government of India yesterday announced its approval for a 1.218 km underground extension of the Delhi Metro’s 4.295 km Line-9 between Dwarka – Najafgarh to Dhansa Bus Stand at a cost of Rs. 565 crores. As per their press release, the Central Government will bear Rs.107 crores in the form of 50% equity (Rs.75.50 cr) and subordinate debt, Japanese International Cooperation Agency (JICA) will provide Rs.323 crore while the rest will be borne by the Delhi Government including equity (Rs.75.50 cr) and subordinate debt.

This small extension was approved in-principle by the Delhi Government on June 23, 2015 but it isn’t clear when the official approval was granted. Interestingly, a few days ago, the DMRC preemptively invited bids for its construction: 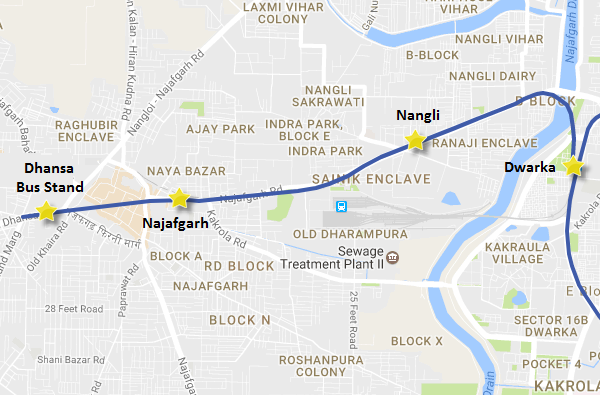 Note – As per one news source, Line-9 will be known as the Grey Line, but the DMRC has not yet confirmed it. With this addition, the line has now officially become 5.513 km long.

DMRC has estimated CC-126 with twin tunnels & one station to cost Rs 300.51 crores, and would like work to be completed within 36 months of the Letter of Award (LoA). The last date for submitting tender documents for bidding is June 19 2017 (3 pm) after which the bids will be opened & evaluated for eligibility on June 20 at 3 pm. Financial bids are expected to be opened in Q4 2017 with work starting in early 2018.

The line’s construction is being carried out under 2 packages and as per the DMRC’s website, 72.18% of civil works had been completed by March 2017.  Trial runs are expected to commence later this year with commercial operations starting in 2018.

With this extension’s late addition into Phase 3 and not the upcoming Phase 4, the Phase 3 project will now truly be over only when this small CC-126 extension to Dhansa Bus Stand opens up – sometime in 2020/2021.