Tamil Nadu’s Chief Minister K Palaniswami yesterday made a short announcement that the state government has appointed Chennai Metro Rail Ltd. (CMRL) to prepare a Detailed Project Report (DPR) for a new metro system in the city of Coimbatore. According to the press release, the project will be funded by the state government and central government with financial assistance from Germany’s KfW Development Bank.

As per the 2011 census, Coimbatore had more than a 1 million residents in its core city and 2 million residents in the metropolitan (urban agglomeration) region. A Bus Rapid Transit (BRT) system has been in the works since 2008, but little progress has been made on its development with the administration not being able to finalize routes due to construction viability issues on the city’s narrow roads, indifferent attitude and buzz surrounding the proposed metro system over the past decade.

The metro system’s development comes as a surprise announcement not just for residents but for local administrators as well. Just earlier this week, the municipal corporation’s commissioner reached out to an Indo-German Smart Initiative group to prepare a detailed project report for the city’s BRTS project.

In October 2015, the city’s municipal corporation submitted a ‘City-wide Concept Plan for Coimbatore’ to the Government of India’s Smart Cities Challenge and that gives an idea of some of the routes on which a metro system could possibly be developed –

All four have been mapped out below – 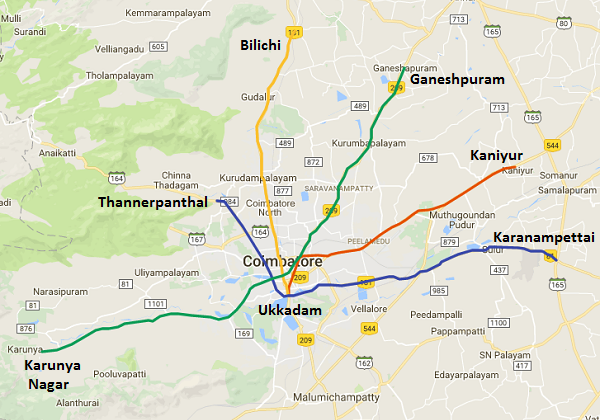 No further details on the DPR’s timeline have been announced, and it is likely to take more than a year to get finalized and placed before the state government’s cabinet for its approval.