The European Investment Bank (EIB), which is one of the two lead financiers of Bangalore Metro’s 21.415 km Line-4 (Reach 6) between Gottigere and Nagawara, has revealed on their website that the Bangalore Metro Rail Corporation will be procuring “about” 96 new metro coaches to run on this new line of the 73.95 km Phase 2 project.

The bank’s board of directors on July 7 2017 approved the line’s funding to the tune of 500 million Euros (approx Rs. 3750 crores), and the funds from this loan deal are expected to cover about 30% of the line’s civil construction and system procurement cost.

BANGALORE METRO RAIL PROJECT – LINE R6
Construction of a 23km metro line and purchase of a fleet of about 96 metro cars in Bangalore, Karnataka, in southern India
– link to project summary

No further details on the coaches’ dimensions or configuration have been listed, but that information can be found in the Environmental and Social Impact Assessment prepared by the BMRCL in May 2017. As per the document, the trains will have a maximum width of 2.88m similar to the current BEML trains on the Green & Purple lines and will be operated in 3 & 6 coach formations, with the six car configuration looking like:

Unlike the BEML trains on the Purple and Green lines which are powered via a 750V DC bottom contact third-rail system, trains on this line are now confirmed to be powered by a 25kV AC overhead equipment (OHE) system with planned substations at Hulimavu & Nagawara. 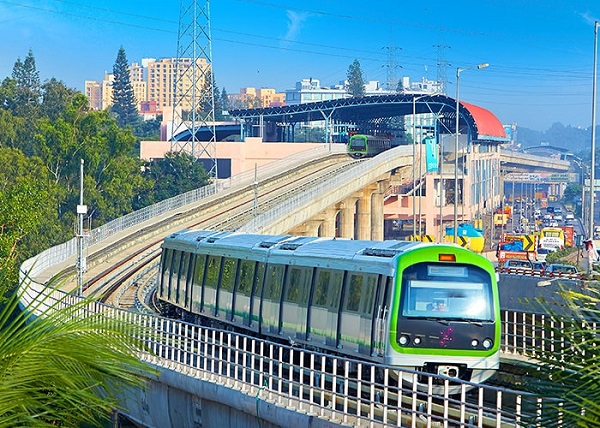 The project page on EIB’s website is updated quite frequently as & when a project moves through the different stages (appraisal, negotiation, approval etc.) but an accurate count of the new coaches will emerge only when the BMRCL receives a thumbs up from the EIB and invites bids from rolling stock manufacturers.

If the 96 coach figure holds up to be true, then trains can be operated in a number of ways:

• 32 train-sets of 3 coaches (under capacity, but a high headway of about 3 minutes can be achieved)

• 16 train-sets of 6 coaches (acceptable capacity, but a high frequency cannot be achieved)
Here’s a rough calculation assuming an estimated time of 84 mins for each train to complete a round-trip journey (40 min per direction & 2 min turn-around time) –
16/84*60 = 11.42 vehicle frequency with a headway of 5:15 mins

Bear in mind that not all trains are operated simultaneously as some are kept on stand-by and some might go undergo maintenance, so 96 coaches are not ideal in any sense from a capacity and frequency stand-point. Hopefully this figure goes up by 1.5x in the tender documents or later during the project’s implementation, otherwise commuters will encounter the same frequency-capacity-personal space issues they’re facing right now on the Purple & Green lines.