The Rail Vikas Nigam Limited (RVNL) has invited bids for the construction of a small 1.405 km incomplete viaduct on Kolkata Metro’s 32 km Line-6 (New Garia-Airport) located in the junction of Salt Lake City and Mahisbathan.

Work here, under package ANV3, was originally awarded to Afcons Infrastructure in October 2011 with a contract value of Rs 212.54 crores, but they pulled out of this section as 10 buildings got illegally built shortly after the line’s alignment was frozen. These 10 buildings include three single-storey, three two storey, a four-storey, a five-storey and two six-storey structures and house apartments and a primary school. After years of procrastination, the West Bengal government engaged the Rail India Technical and Economic Service (RITES) in early 2016 to see if a realignment was possible, but that turned out to be not feasible.

RVNL hasn’t provided an estimated value or timeline to complete works. The last date for submitting tender documents for bidding is October 12 2017 (11 am) after which the bids will be opened & evaluated for eligibility at 11:30 am. 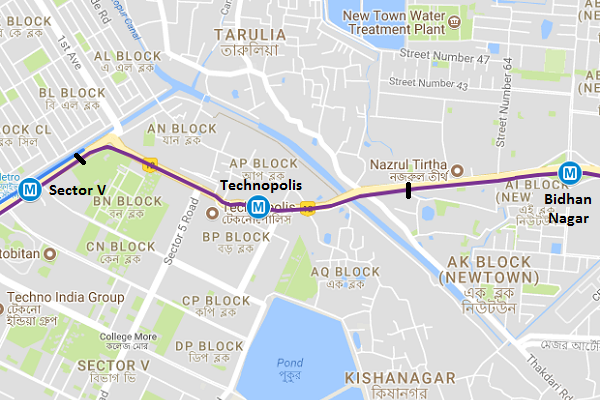 Note – the Technopolis Station’s construction is part of Gammon India’s scope of works.