Last week, the Bangalore Metro Rail Corporation Ltd. invited bids for commissioning a new communications system for the four new extensions, totaling 33.352 km, of the city’s operational Phase 1 lines under the 73.95 km Phase 2 project. Deep within the ‘Brief Scope of Work’ tender document, they’ve mentioned their intention to procure an additional 16 new 6-coach metro trains for the Purple & Green lines on top of the 150 new coaches currently being manufactured by BEML to convert the existing 50 3-coach trains into 6-coaches.

a. All the 50 numbers of 3 car trains of Phase-I will be converted into 6 car consists by the addition of 2 Motor Cars and 1 Trailer Car. The contractor shall carry out testing of on-board works for conversion from 3 cars to 6 car trains consists, and commission trains as and when the conversion of 6 cars trains consists are completed.

b. Provision of On Board communication equipment and associated accessories in new 16 nos. of 6 car train sets. BMRCL has planned to procure 16 nos. of new 6 cars train sets which have to be operationalized in the existing lines and extensions for which On Board Communication works shall be done under the Scope of the contract No. 5 S&T (Tele)-DM.

50 nos. of 3 car trains procured under Phase I will be converted into 6 car train consists (DMC+TC+MC+MC+TC+DMC) by augmenting with additional cars. Sixteen (16) no of new trains (6 car consists) will be separately procured for which on Board ATC equipment will have to be commissioned and all trains tested to run on the entire Line 1 or Line 2 including extensions.

The four extensions mentioned above are all under construction and include:

A map displaying the above extensions and a list of assigned civil contractors can be viewed here. 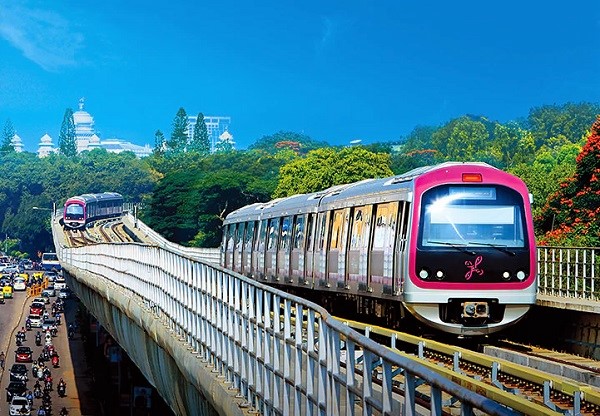 This upcoming order for new trains on the expanded network is along expected lines, and an accurate count of the new trains will emerge only when the BMRCL invites bids from rolling stock manufacturers after securing funding through the state government or an external lender.

If this 16 number holds up to be true, then Bangalore Metro’s fleet for the 75.42 km Purple and Green lines will consist of 66 trains of 6 coaches by 2021-22. While the induction of 6-coach trains will provide much needed capacity per train right away, train frequency will still remain inadequate, in fact worsen, as the combined route length will go up by 79% from 42.10 km to 75.42 km, but the number of trains will go up by only 32% from 50 to 66.