Sydney Metro has announced the delivery of the first Alstom Metropolis trainset to its Rouse Hill Depot on the 36 km Northwest Line. The 6-coach train was built at Alstom’s Sri City (Andhra Pradesh) facility in India and is part of a 22 trainset & signalling system order placed under a €280 million contract in September 2014.

The new train is capable of being operated automatically through the Automatic Train Protection and Automatic Train Operation (ATP/ATO) modes with the help of Alstom’s Urbalis 400 communications-based train control (CBTC) signalling solution. As per Alstom’s brochure, the trainsets feature three double doors per car side, two multi-purpose areas per for prams, luggage and bicycles and two wheelchairs spaces per car. The air-conditioned trainsets have 38 surveillance cameras per train, emergency intercoms, 2 PID (passenger information display) systems per vestibule, 6 live electronic route-maps per car and an exterior front display of the train’s destination. 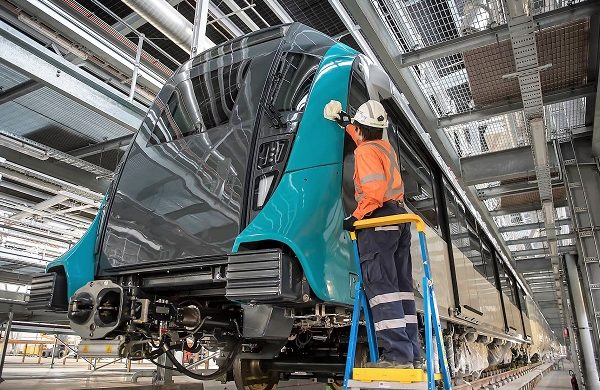 The production and export of these metro coaches is a boost to the Government of India’s “Make in India” campaign which aims at turning the country into a global manufacturing destination. Last year in February, Bombardier from its Savli (Gujarat) plant began exporting trainsets to fulfill a 75 train x 6 coach order for Queensland’s new South East rail network.

Sydney Metro plans to prepare for tests over the next few months and hopes to begin operations on the 36 km Stage 1 of the line in the first half of 2019. The line (see map) includes 15 km of tunnels and 4 km of elevated railway through eight new stations, between Cudgegong Road and Epping, and five upgraded stations, between Epping and Chatswood, on the existing commuter line.