Officials from the Chennai Metro Rail Ltd. (CMRL) have revealed that NCC Ltd. and Simplex Infrastructure Ltd. have each been awarded with a contract to build the 6.20 km elevated extension between Korukkupet Ramp and Wimco Nagar on the 32.10 km Blue Line. This elevated section is the last major piece of the Rs. 3,770 crore 9 km extension between Washermenpet and Wimco Nagar which was approved by the Ministry of Urban Development in June 2016.

CMRL in November 2016 invited bids for this section’s substructure/foundation works (piles & pile cap) under package ECV-103. The contract for that was awarded to NCC in March 2017 and ground work commenced in July.

CMRL then invited bids for the superstructure work (piers, viaduct & stations) in May 2017 under package ECV-101 & ECV-102 with each package consisting of 3 stations –

No further details on the award date or contract value have been announced. I’ll add that piece when available. As per one reader, pier work has already started with rebar for many visible close to the Thiruvottiyur Ajax Bus Station, so its likely that CMRL’s revelation is dated.

This is the first major metro contract for both firms in Chennai. In the past, Simplex has performed piling work for building CMRL’s headquarters in Koyambedu while NCC has been roped in to finish remaining construction work on Little Mount, Guindy, OTA, Alandur and Ekkattuthangal (SIDCO) stations. 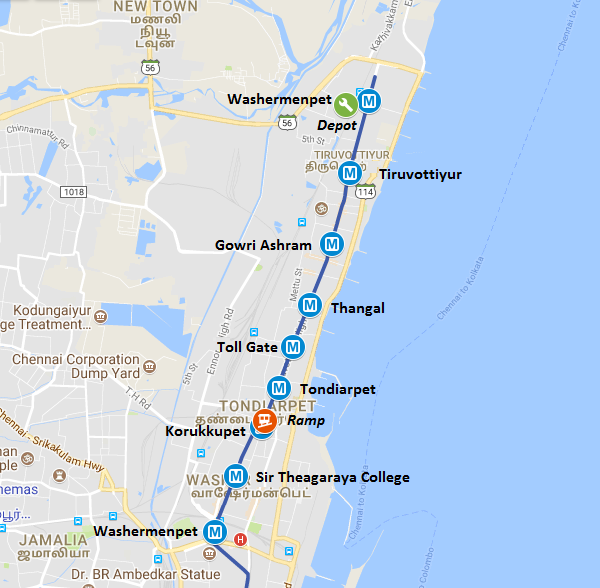 CMRL in December 2015 first logically invited bids for the time-consuming 2.4 km underground section (package UAA-08 Washermenpet – Korrukupet) and awarded the contract to Afcons Infrastructure in June 2016. With the help of north Chennai’s soil profile, they just achieved their final TBM breakthrough for the package on October 31 – 4 months ahead of the deadline.

With this development, the new Wimco Nagar Depot is the only civil component of the 9 km Phase 1 extension project which requires a contractor to be assigned; bids for that were invited in September.