Update – MMRDA awarded 2 contracts to both consortia on March 3, 2018.

So back on February 12 when the bids for the 32.32 km Line-4 were opened, the Mumbai Metropolitan Region Development Authority (MMRDA) in fact also opened the financial bids for two packages on the 11.007 km eastern section of the 23.72 km Line-2B between Bandra Kurla Complex – Chembur – Mandale. The lowest bidders for both are RCC-MBZ JV (Package CA-06) and Neeraj-Guan JV (Package CA-07) – two relatively obscure new entrants to metro construction.

MMRDA had reinvited bids for these two packages on Line-2B’s eastern section in November 2017, with new lower estimates, after a failed first round of bidding where the lowest bids received were 24.94% to 26.99% higher than the MMRDA’s estimates. 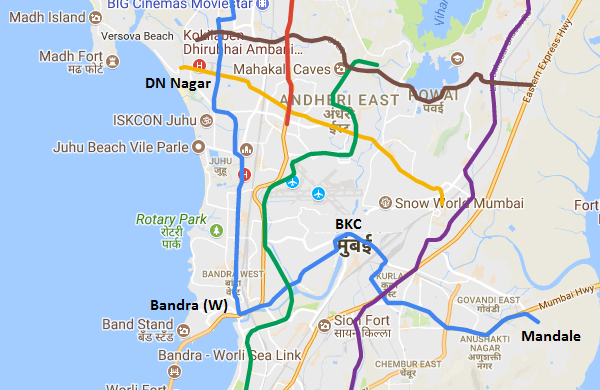 The combined lowest bids are an insignificant 1.22% higher than MMRDA’s estimate, so a re-tender won’t be required. If no extraneous issues arise, then in the coming weeks RCC – MBZ JV and Neeraj – Guan JV will go on to be awarded with a contract each.

As far as timelines go, in the Indian Express, MMRDA’s Additional Metropolitan Commissioner mentioned that initial site preparation work will commence in March for both the 32.32 km Line-4 and 23.72 km Line-2B, which is a little too aggressive as the soon-to-be-appointed-contractors will need a couple months to mobilize men and machinery.

While the geotechnical survey for the two corridors will be happening along the alignment, we will be barricading only four patches for Metro 2B and five patches for Metro 4 to begin with. As work progresses we will take up more areas.

Meanwhile, the 12.714 km western section (Package  CA-04B) of Line-2B was quietly awarded to Simplex Infrastructures on December 20 2017 after they emerged as the lowest bidder in November. They’ve just started bringing in barricades at DN Nagar –

@rajtoday @TheMetroRailGuy On this glorious Sunday morning, I am please to announce start of construction of Mumbai metro Line 2b. Barricades have started to arrive at DN nagar pic.twitter.com/9tlx61iV7W